IFSD finds that that the Conservative Party Platform Costing merits an overall ‘pass’ rating, including a ‘pass’ rating on the principles related to realistic economic and fiscal assumptions and transparency; and a ‘good’ rating with respect to responsible fiscal management.

The Conservative Party of Canada (CPC) released its 2019 Platform and fiscal costing (For You to Get Ahead) on October 11, 2019. The document outlines the CPC’s policy positions and provides a fiscal overview including a strategy, individual costed measures, and summary tables for revenues, spending and budgetary balances.

From a transparency perspective, IFSD wishes to note that the Conservative Party costed platform should have been released earlier in the campaign – before the commissioned debates and well before the start of advanced polling (not the day advanced polling begins). The late release of the costed platform unduly limits debate and scrutiny of the Conservative Party fiscal plan by leaders and the media.  Furthermore, it unduly limits the time for consideration and reflection by voters with respect to the issue of fiscal credibility of the Conservative platform.

Overall, the fiscal strategy in the CPC Platform is focused on achieving budgetary balance over the next five years. Using the PBO baseline projections for relatively modest but declining deficits beginning in 2020-21, the CPC proposes reductions to tax revenues and large reductions in government spending to get back to balance. The reductions to revenues largely come from the reduction in the lowest personal income tax rate and increased tax expenditures related to home energy and maternity and parental benefits. The focus on spending restraint comes from relatively large reductions in direct program spending including infrastructure and government operations.

In the CPC fiscal plan, the budgetary balance tracks closely to the PBO pre-election baseline over the next three years as new tax cuts and spending are deemed to be offset by new savings and revenue measures. The budgetary deficit is projected to rise to $23 billion in 2020-21, from $14 billion in 2018-19, and then decline to $10.1 billion in 2022-23, with a projected surplus in 2024-25 (possibly a year after the next federal election). The decline in the budgetary balance is driven largely by reductions in infrastructure spending and government operations and anticipated additional revenues through tax enforcement.

The CPC fiscal plan is given a ‘pass’ rating on realistic assumptions. The plan is clearly based on PBO economic and fiscal planning numbers and many of the new tax and spending measures have been costed by the PBO. The plan highlights economic and fiscal challenges related to productivity growth, economic uncertainty and fiscal instability. While the plan highlights important challenges, it can be argued that the fiscal plan does not correspond to some of these challenges. Deficit financing tax cuts in the short-term with the promise of finding more unspecified spending savings over the medium-term lacks credibility. Cutting annual infrastructure spending by half relative to current baselines is not consistent with a policy of trying to increase long-term economic growth.

The CPC fiscal plan is given a ‘good’ rating on the principle of responsible fiscal management. A balanced budget medium-term target is a hard fiscal anchor. Assuming the economic assumptions are realized, Parliament, media and Canadians can hold the government responsible and accountable to a declining projected deficit track. In addition, the CPC plan proposes a spending rule whereby any new spending not proposed in the platform would have to be offset by additional spending reductions.

If implemented, they could serve as a mechanism for accountability.

The CPC plan proposes balanced budget legislation after the budget is balanced. This commitment is weak given the timelines and may potentially be bad economic policy depending on its construction. There are no prudence adjustments included into the planning framework, which does raise risk around achieving the balanced budget target.  The plan does not focus on the issue of long-term fiscal sustainability explicitly.  Implicitly, however, targets such as budgetary balance over the next five years, are consistent with long-term fiscal sustainability.  There is no explicit prudence adjustment in the proposed fiscal framework.

It is noted that there are significant fiscal savings sought through direct program spending. The planned reductions would represent a large percentage cut over the next five years.  Spending reductions target areas including government operations and spending on an array of policies including infrastructure, national defence and security, natural resources, environment, and agriculture. There are significant fiscal and service level risks associated with these savings through planned spending reductions.

The CPC fiscal plan is given an overall ‘pass’ rating on the principle of transparency. It is disappointing that the plan was released today after the commissioned debates and on the first day of advanced polling.  Especially, as measures which are larger in fiscal weight than those previously announced during the campaign and are essential to achieving the government’s overall fiscal objective of a balanced budget over the next five years, are included. The high levels of transparency achieved by the CPC with respect to announcements of tax reductions and new spending (including backgrounders and PBO costing releases), were not matched in the release of the platform and fiscal plan.  While spending reductions are proposed (with targets for savings), there are no implementation plans with risk assessments to account for the impact of these changes. 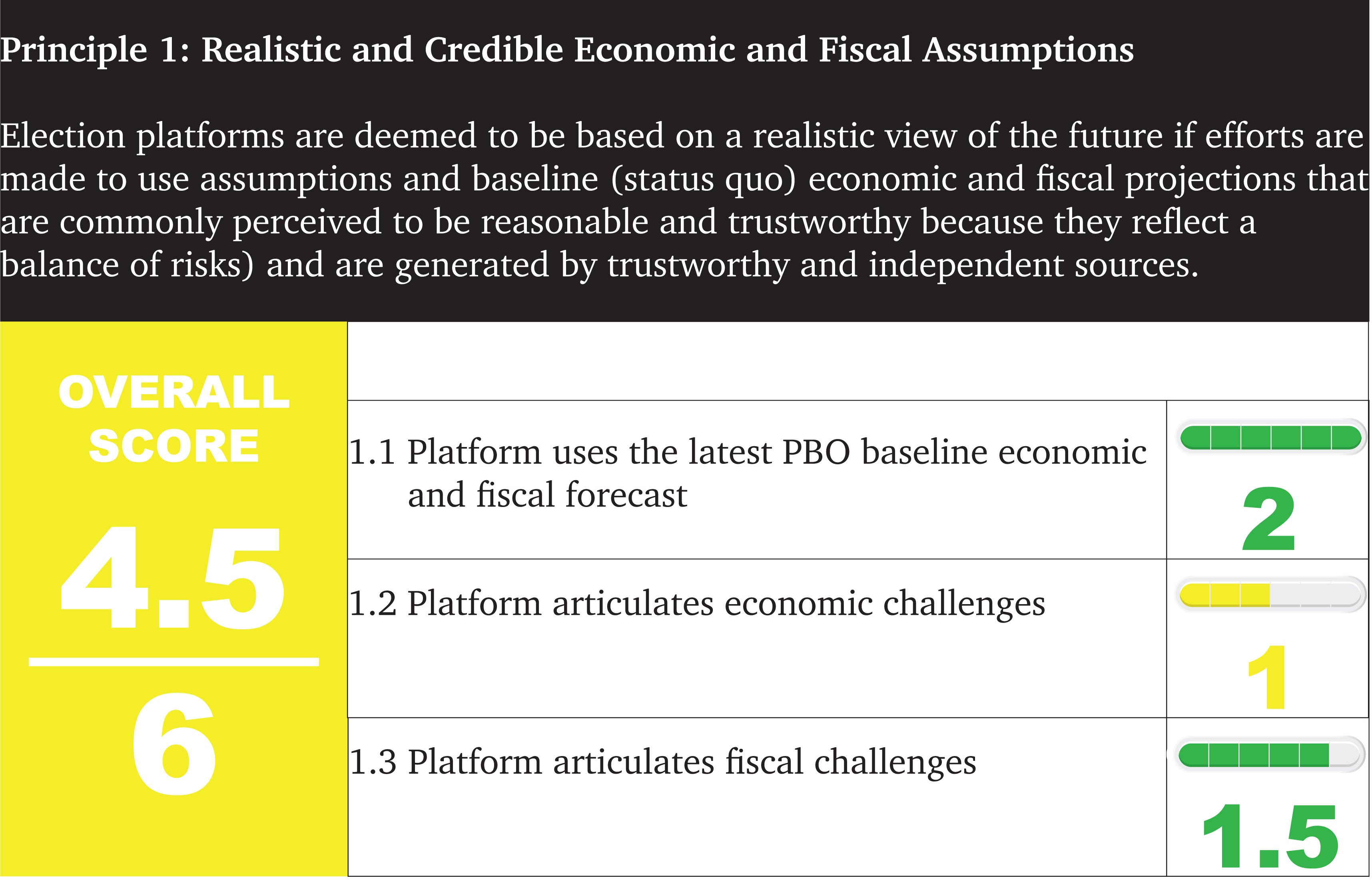 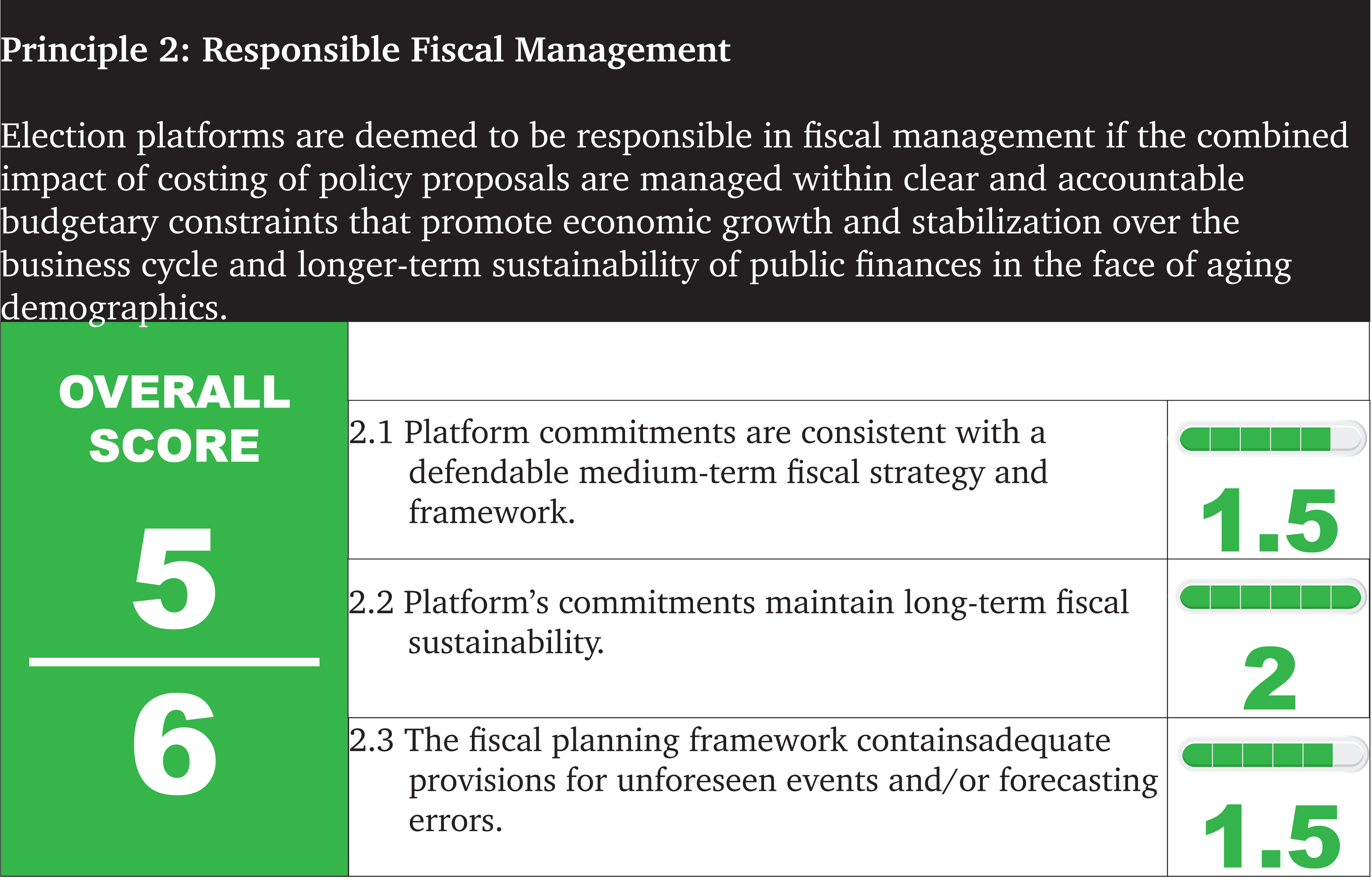 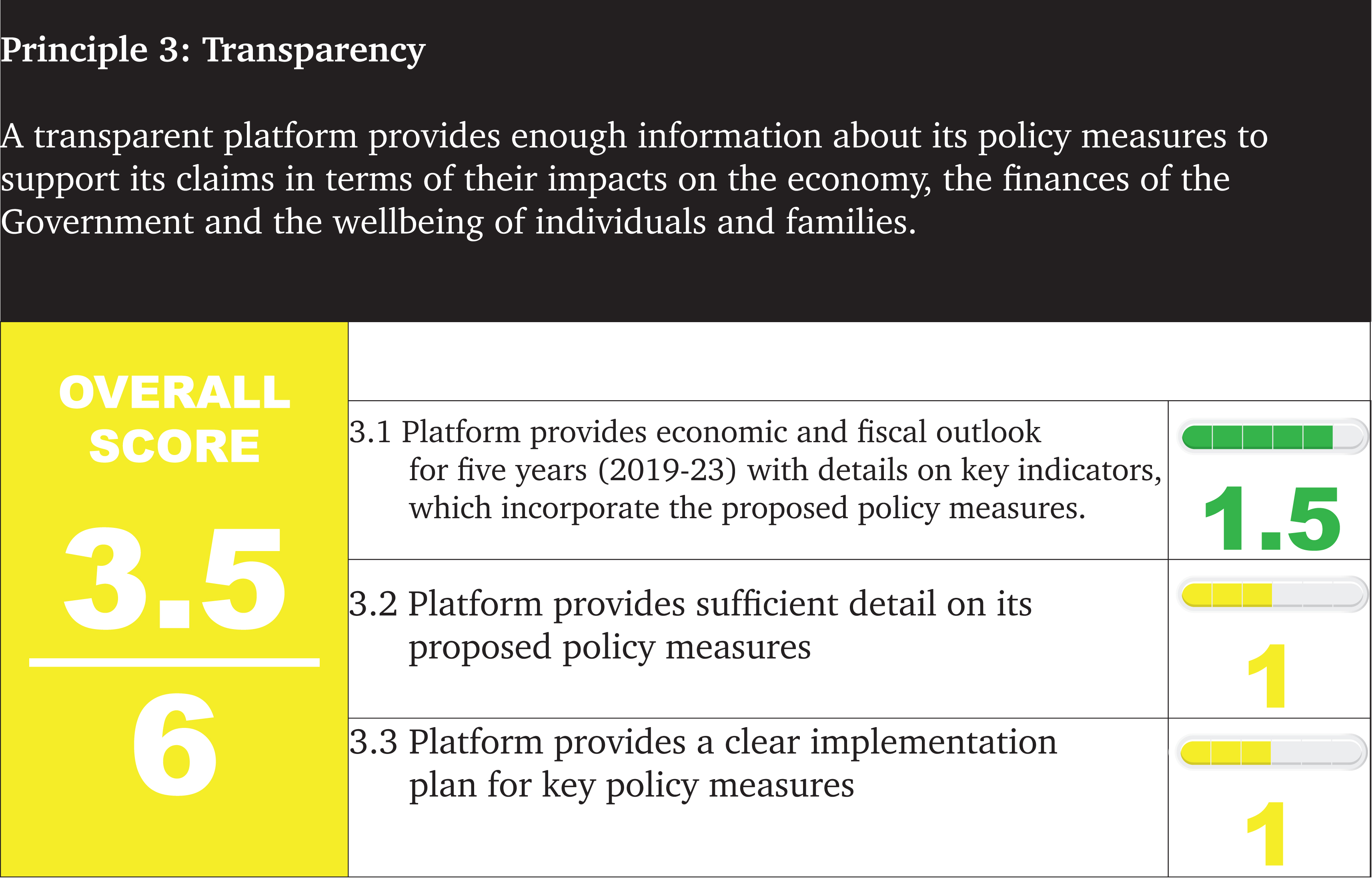