Education Spending in Ontario: From the Classroom to the Cabinet Table

by Randall Bartlett and Alex Reeves

Education spending is always a heated topic no matter where you live, as the future economic and social success of children is paramount to everything from financial security in old age to long-term economic growth. But what drives education spending and the outcomes attained are often more a matter of bluster and presumption than hard numbers and facts.

Sorry Barbie, but the math really isn’t all that hard

Thankfully, the Government of Ontario makes understanding the expenditures on the Ontario education system pretty clear. In April 2018, the Institute of Fiscal Studies and Democracy (IFSD) published analysis which shed light on spending by Ontario’s four largest departments in the 2016-17 fiscal year, including the Ministry of Education. What became clear from this analysis was that much of the $27.0 billion spent on education in that year was transferred to administrative bodies outside of the core Ontario Public Service (OPS), largely school boards. Chart 1 presents this information, updated for the recently released Public Accounts of Ontario for the 2017-18 fiscal year. Indeed, spending by the core Ministry of Education totalled only $0.4 billion in fiscal 2018-19, a mere 1.5% of its total spending. Meanwhile, given the nature of how the funds were transferred, the remaining 98.5% of education spending was subject to less direct oversight by politicians and public servants than spending in the core OPS. This may help to explain why spending by the Ministry of Education advanced at a slightly higher average annual pace than nominal GDP from fiscal 2009-10 through 2017-18 (4.4% versus 4.2%, respectively). Meanwhile, total program spending for the entire Government of Ontario grew even less quickly (3.8%) over the same period.

But the transfers to school boards and the like in Ontario provide very little information on how education dollars are actually spent. To understand this, we look to other reporting documents from the Ministry Education, notably various vintages of Quick Facts – Ontario Schools and the Education Funding Technical Paper. The former document provides information on student enrollment while the latter outlines per student costs of everything from school supplies to classroom teachers as well as aggregate spending on other more specific programs. Both of these documents provide this information by individual grade level or grouping (e.g., Junior and Senior Kindergarten (JK & SK), Grades 1 to 3, Grades 4 to 8, and Grades 9 to 12). 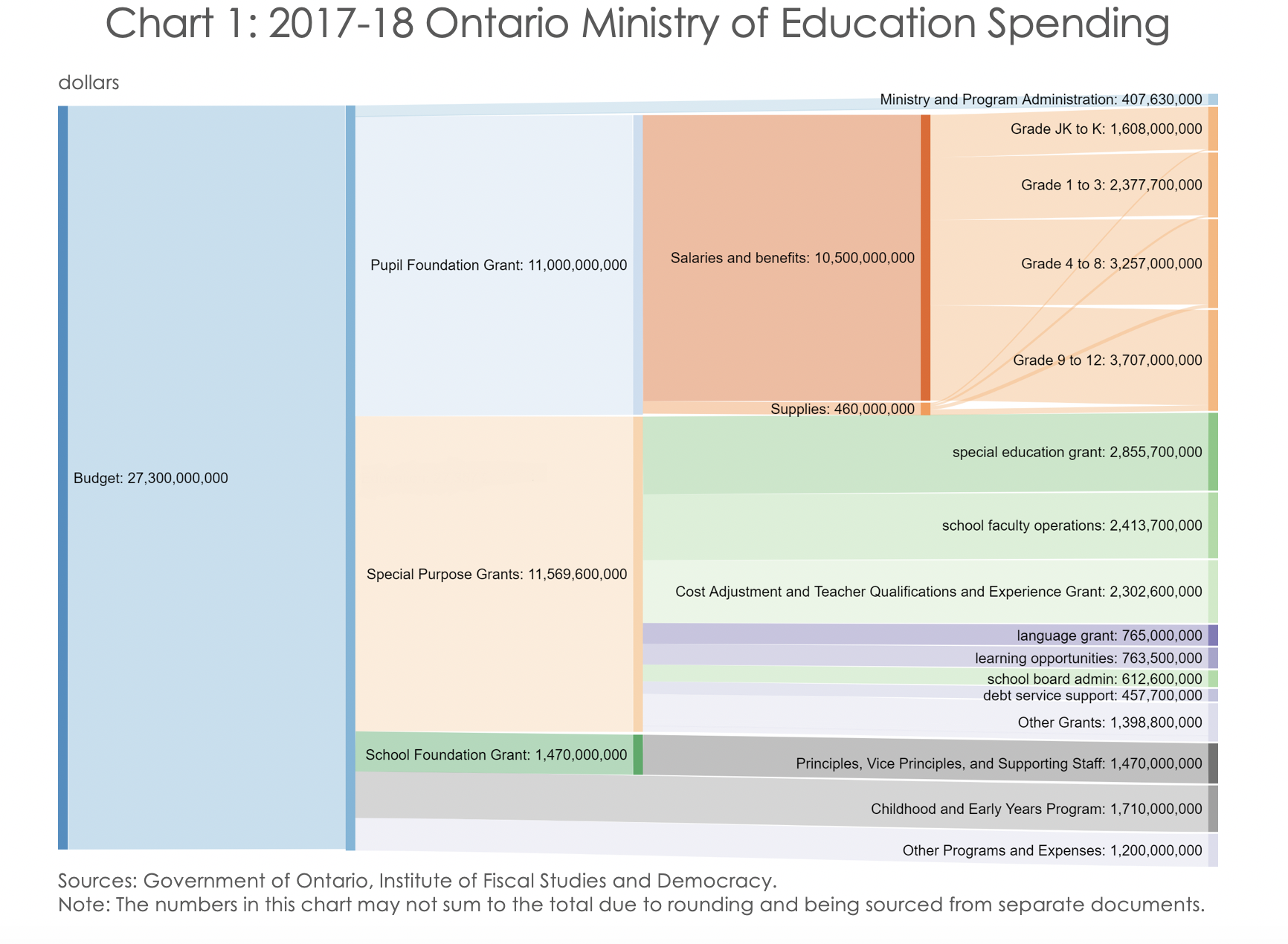 From these documents, as well as the Public Accounts of Ontario, the IFSD is able to construct bottom-up estimates of education spending (less pension contributions) from JK to Grade 12 which line up well with the province’s audited financial statements (Chart 2). This is particularly the case from fiscal 2005-06 through 2011-12. But beginning in the 2012-13 fiscal year, this relationship breaks down somewhat, although the Public Accounts and IFSD estimates never differ by more than about 8% in any given year. It should be noted that these discrepancies appear to be related to both increases in spending related to supplementary estimates and accounting revisions made to the historical Public Accounts. 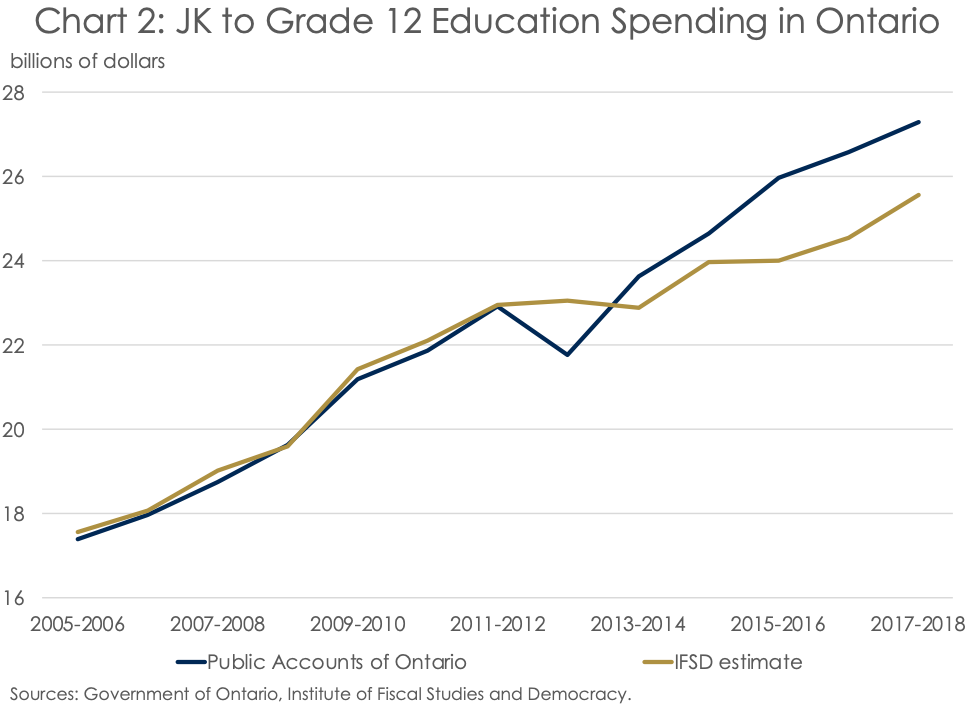 And what the data shows is striking. In the 2018-19 school year, Ontarians are expected to spend an average of nearly $6,400 on each student in JK and SK (Chart 3). This compares to around $5,700, $4,900, and $6,000 for the average student in Grade 1 to 3, Grades 4 to 8, and Grades 9 to 12, respectively. Unsurprisingly, in all cases, the primary driver of per student expenditures is the cost of a classroom teacher. Add to that the cost of an early child educator for students in JK and SK, and the reason for the higher cost of educating kindergarteners is clear. 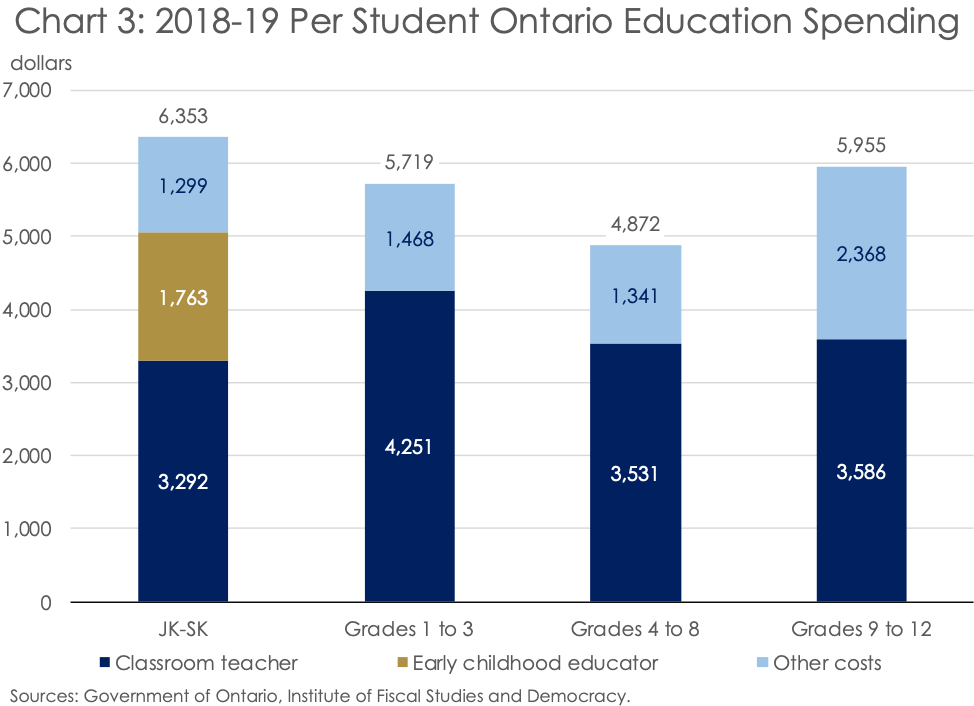 Of course, it shouldn’t be forgotten that some of the per student cost difference is driven by varied class sizes across grade levels. For instance, the average class size in Grades 1 to 3 is around 20 students as opposed to around 25 students in the other grades. Indeed, once class size is taken into account, the average teacher makes about $85,000 per year between their salary and benefits, regardless of grade level which they instruct. 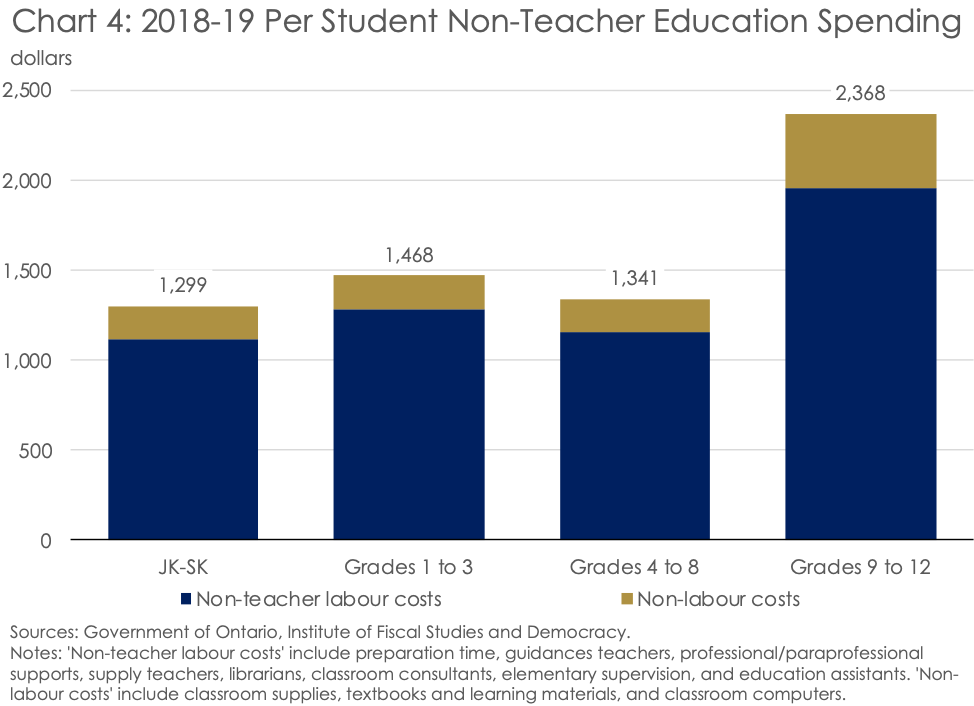 Also noteworthy is that from JK to Grade 8, per student spending of non-teacher-related costs, such as supplies, textbooks, computers, and the like, falls within the tight range of $1,300 to $1,500 in the 2018-19 school year (Chart 4). Meanwhile, non-teacher-related costs associated with Grades 9 to 12 are closer to $2,400 per student, largely reflecting the need for greater preparation time and additional resources for guidance teachers. 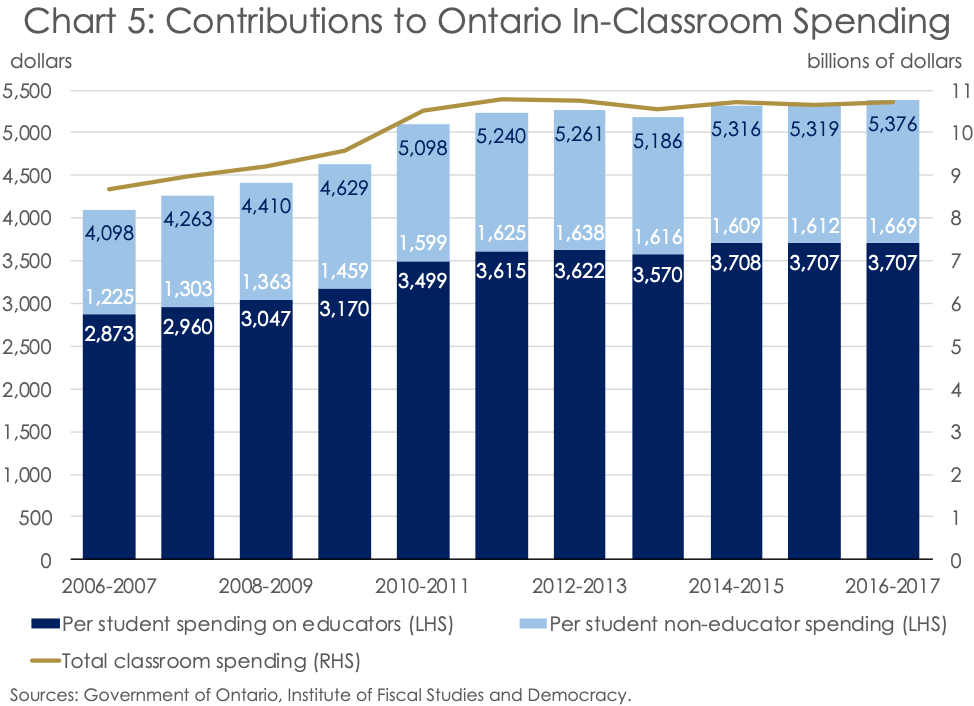 Put all of these costs together, and one gets an estimate of roughly $5,375 spent on the average Ontario student in the 2016-17 school year for classroom costs (the last school year for which official estimates for all of the data are available). When applied to each of the over 2 million Ontario students in JK to Grade 12 in that year, one gets a total of $10.7 billion spent on in-classroom costs (Chart 5). While the highest level of aggregate in classroom spending since the 2012-13 school year, reflecting both rising per student costs and school-age population, this cost remains below the IFSD’s estimated historic peak of $10.8 billion reached in 2011-12. The cause of the rapid rise in both aggregate and per student spending through the 2011-12 school year is largely the result of greater spending on teachers, both for in-classroom and preparation time. A more modest contribution was also played by the reduction in class sizes in Grades 1 to 3.

It is important to keep in mind that in-classroom costs make up less than half of total expenditure on education in the province of Ontario. The remainder is comprised of a plethora of targeted grants for everything from principals and vice-principals to Indigenous programming to student transportation. In the 2018-19 school year, these amounts are expected to total $13.0 billion, slightly more than 20% higher than expected aggregate in-classroom expenses in the same year (Chart 6). In addition to these grants there is the additional $1.7 billion cost of child care and early years programs in the 2018-19 school year, as well as much more modest spending on the Ministry of Education Administration Program ($22 million) and Community Services Information and Information Technology Cluster ($57 million). 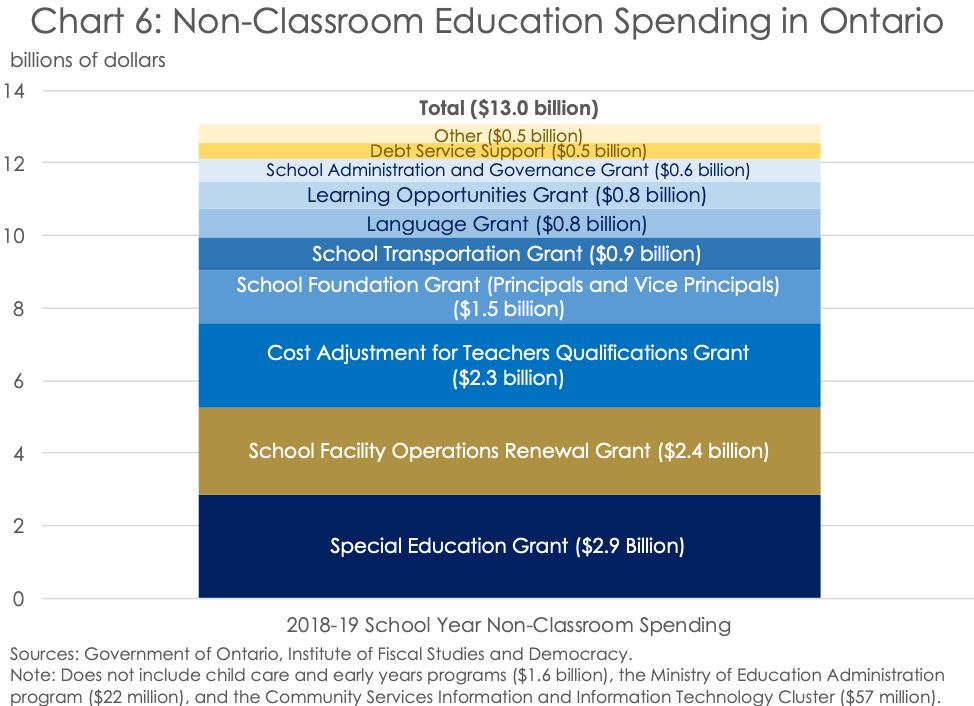 But this doesn’t quite get to the total estimate of spending by the Ministry of Education in the Public Accounts of Ontario. The estimate provided thus far includes everything except provincial government contributions to the Ontario Teachers’ Pension Plan and costs associated with core ministerial administration. In the 2017-18 fiscal year, this amount equates to around $1.7 billion for teachers’ pensions, taking the Public Accounts estimate of total cost to $29.0 billion in that year.

Now that we know what was spent on education over history and the IFSD has laid out its bottom-up methodology for estimating expenditures, it is possible to project these historical trends going forward.

The first step in doing this is to project the future population of students. To do this, we’ve relied on the data from the medium (M1) population projection scenario from Statistics Canada. This is the scenario used in the base case forecast of the IFSD’s 2017 Fiscal Sustainability Report (FSR), and will be used again for the same purpose in the upcoming 2018 FSR. Chart 7 presents the IFSD’s estimate of Ontario’s student population, which is expected to increase from about 2.0 million students in the 2016-17 school year (the last year for which official estimates are available) to just over 2.75 million students in 2063-64. Not surprisingly, the most populous number of students is expected to be within Grades 4 to 8, followed by those students of secondary-school age. 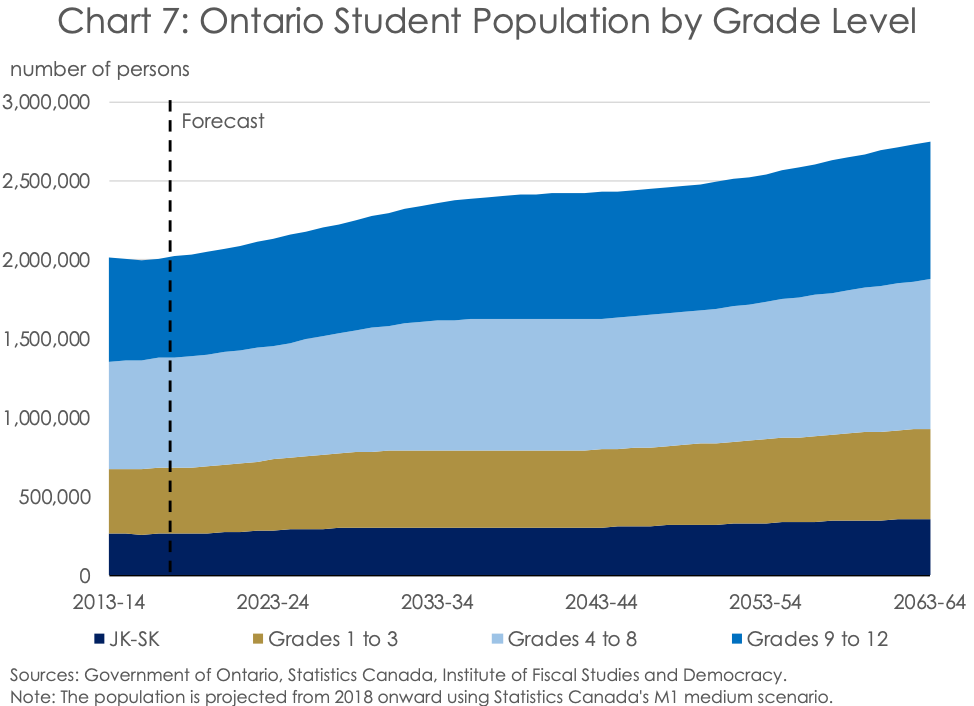 To undertake the remainder of the expenditure forecast, we apply an approach similar to that used in the IFSD’s work on the Canada Health Transfer. Specifically, in its health care cost forecast, the IFSD looked at the outlook for four major cost drivers – population growth, aging, inflation, and real income growth (subject to an elasticity of 0.8)  – in a manner similar to that employed by both the Parliamentary Budget Officer and Organization for Economic Cooperation and Development. Using this approach over history, the annual average increase in education expenditures in Ontario would have been 1.7% from the 2006-07 through 2016-17 school years if it had remained in line with the underlying macroeconomic drivers. This is the same average annual growth rate of in-classroom spending found using the IFSD’s bottom-up estimation approach over the same period. However, over such a short time horizon, it is difficult to know whether this is a coincidence or by design, as the annual growth in estimated education expenditures using these two approaches were uncorrelated over this period (Chart 8). Regardless, each of these approaches provided an estimate of education spending growth that came in well below aggregate expenditures in the Public Accounts, which averaged 4.0% annually over the same period. This suggests spending enrichment – the additional historical cost beyond the underlying cost drivers – for education is well beyond two percentage points. This is considerably greater than the 0.5 percentage points of enrichment for health spending historically. 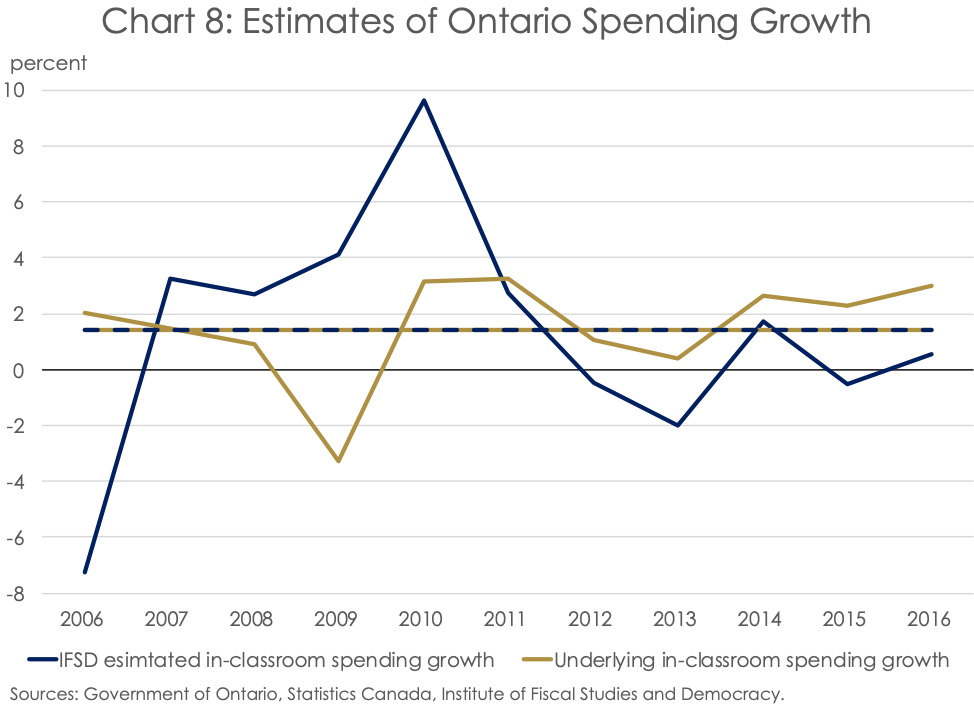 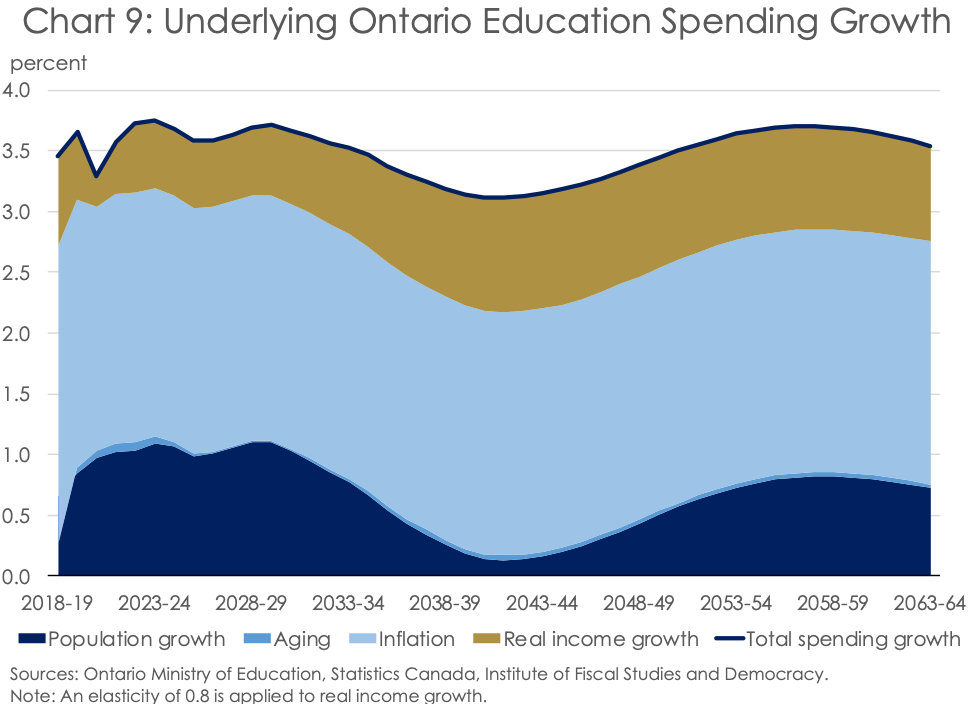 Applying the education spending forecast based on the bottom-up IFSD outlook to the historical education expenditure estimate from the Public Accounts of Ontario results in an outlook for education spending which rises from $30.0 billion in the 2018-19 school year to $42.7 billion in 2028-29 (Chart 10). By the end of the IFSD’s long-term forecast in the 2063-64 school year, we anticipate spending by the Ministry of Education to toreach $140.3 billion. 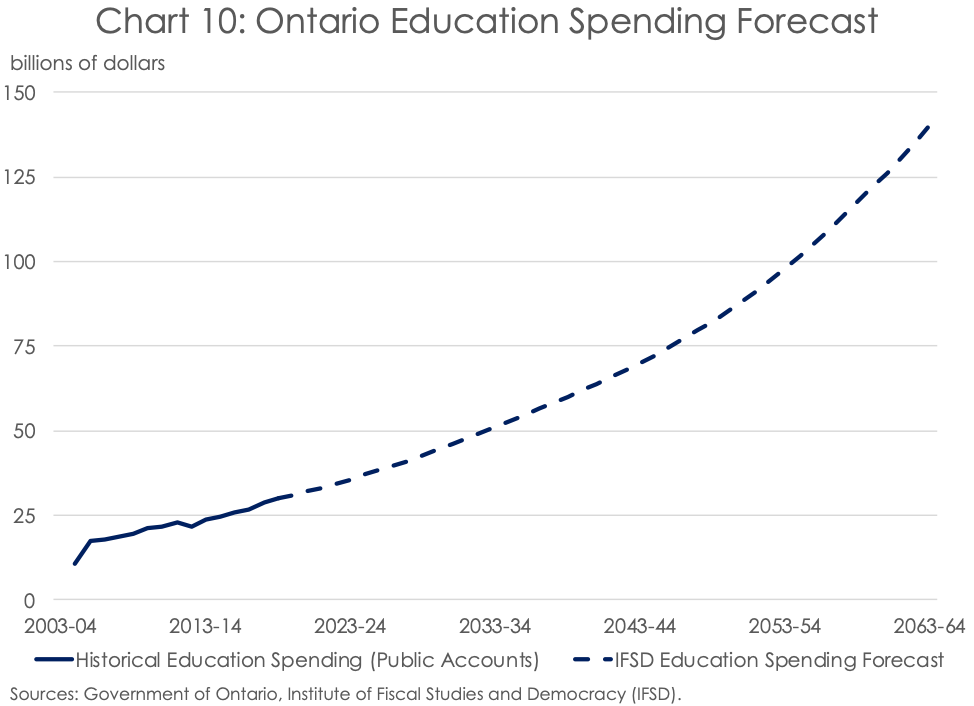 This will be no small task. As the provincial government looks to find savings in the fiscal framework to dig itself out of the depths of its current deficit doldrums, education spending will likely come under the microscope. But where the government looks to find savings must be informed by evidence. And the evidence suggests most of the cost of education is in labour, which is a fight that may be difficult to avoid in working to return Ontario’s fiscal situation back to sustainability.

Of course, what has been presented so far is only half of the conversation. While this analysis of spending allows for money to be traced from Queens Park to the classroom, it fails to incorporate the other half of the conversation – the outcomes of students – which is the value proposition for taxpayers. How funding correlates with the outcomes of students, and what that will mean to both citizens and policymakers, needs to be better understood. With this in mind, the interconnectedness of funding and student outcomes will be the focus of future IFSD research.

The road to fiscal sustainability in Ontario will be long. But the province will be better for it.