The Election and Public Finances

In the 2019 federal election, between the two front running parties, there seems to be battle lines drawn between the party of fiscal responsibility and the party of policy leadership.  We are led to believe that these choices are mutually exclusive.  Both the Conservatives and the Liberals are to blame for this confusion.  The blame can be shared by the rest of us who have failed to explain the nuances of a well performing government budgetary system.  We have attempted to assess the party platforms for fiscal credibility (available at www.ifsd.ca) but feel that we should now put these in some context.

The Conservatives have defined fiscal responsibility in terms of a balanced budget, which they do not achieve during the 4-year mandate. Meanwhile the Liberals cling to a barely reducing debt-to-GDP fiscal anchor. Both fiscal targets and plans could easily be thrown off track by changes in the economic outlook (i.e., a recession)

Contrary to the slogans and rhetoric, the Canadian economy is performing relatively well (historically lowest unemployment rate and economic growth close to its trend rate) and a fiscal situation that would the envy of all our G-7 partners except Germany.  Even under the Liberal platform, the fiscal deficit would be less than one per cent of the size of the economy and debt interest costs would be about seven cents per every dollar of revenue.  Neither the Liberal plan nor the Conservative plan would lead to a much better economic outcome or an unsustainable fiscal situation.

When we looked at federal elections since 1872, we could find little correlation between an incumbent governments fiscal balance and its subsequent electoral outcome.  However, this doesn’t mean that Canadians don’t care about government spending.  Recent governments with budgetary surpluses have been tripped up by IT projects, military procurement, sponsorship etc., all operational efficiency issues, which we found to be frequently cited in the subsequent elections that they each lost.  The reality is that the 2019 election might hinge on allocation issues …addressing affordability, income equality and climate change.

We hope that voters will consider the pitches of the various parties from a broad public perspective.  Between the Conservatives and the Liberals, they will each leave you with a little bit more money in your pocket depending on your income group.  Neither party is offering a new plan to address the economic challenges facing the economy, including productivity, ageing demographics and a declining manufacturing sector.

According to some experts, the Liberals appear to have a credible plan to address climate change, while the Conservatives have chosen to largely ignore the issue.  The Conservatives want to tackle the broader issues of confidence in public finances; refreshing but lacking a credible strategy as they plan to reduce the size of the government without acknowledging the impact on the quality of services that Canadians.  Four years after launching an ambitious infrastructure budget, the Liberals still don’t have a national strategy or a framework to assess its performance.  The Conservatives want to use planned infrastructure spending as a source of funds to balance the budget. The NDP and Green Party have put out an aspirational political narrative, with a complex and ambitious multi-jurisdictional fiscal plan to address a range of issues including health care, education, housing, First Nations and climate change, which require an enormous and historic influx of tax revenues and a renewed spirit of fiscal federalism to have any real prospects for implementation.

In the end, voters should consider themselves fortunate that all the major parties are offering platforms that are broadly fiscally sustainable; though the NDP and Green Party plan have the biggest gap to fill between political narrative and implementation plan.  The Bloc Quebecois plan is narrowly focused on policy positions that will benefit one province.

In the end, voters will have to ask themselves a basic but fundamental question about the role of the state.  Can we trust the government to act in the national interest to act on climate change, income inequality with modest budgetary deficits or do we pine for a smaller government footprint where tax cuts are used to promote growth and regulations (not carbon pricing or taxation) are deemed sufficient to address Canada’s responsibilities with respect to climate change?  Our leaders and parties are as flawed as we are; but as we face the very real prospect of a minority government, those same actors that have driven wedges among us throughout the campaign will be asked to lead the way in the most Canadian of manners – with cooperation and compromise.

With platforms available, it is possible to compare planned fiscal results over the next four years of the four national political parties: The Conservative Party (CPC); the Liberal Party (LPC); the National Democratic Party (NDP); and, the Green Party (GPC).

All parties have proposed numerous tax and expenditure measures for the next four or five years.  Most of the measures have been costed by the Office of the Parliamentary Budget Officer (PBO) on the basis of its baseline projection prepared in June. This allows a more robust comparison of platforms’ fiscal projections since the costs have been estimated independently and on the basis of the same baseline projection.

Are the platform plans fiscally responsible?

The following graphs show the projected fiscal deficit and revenue and expenditure changes of the platforms in billions of dollars and as a share of the size of the economy. 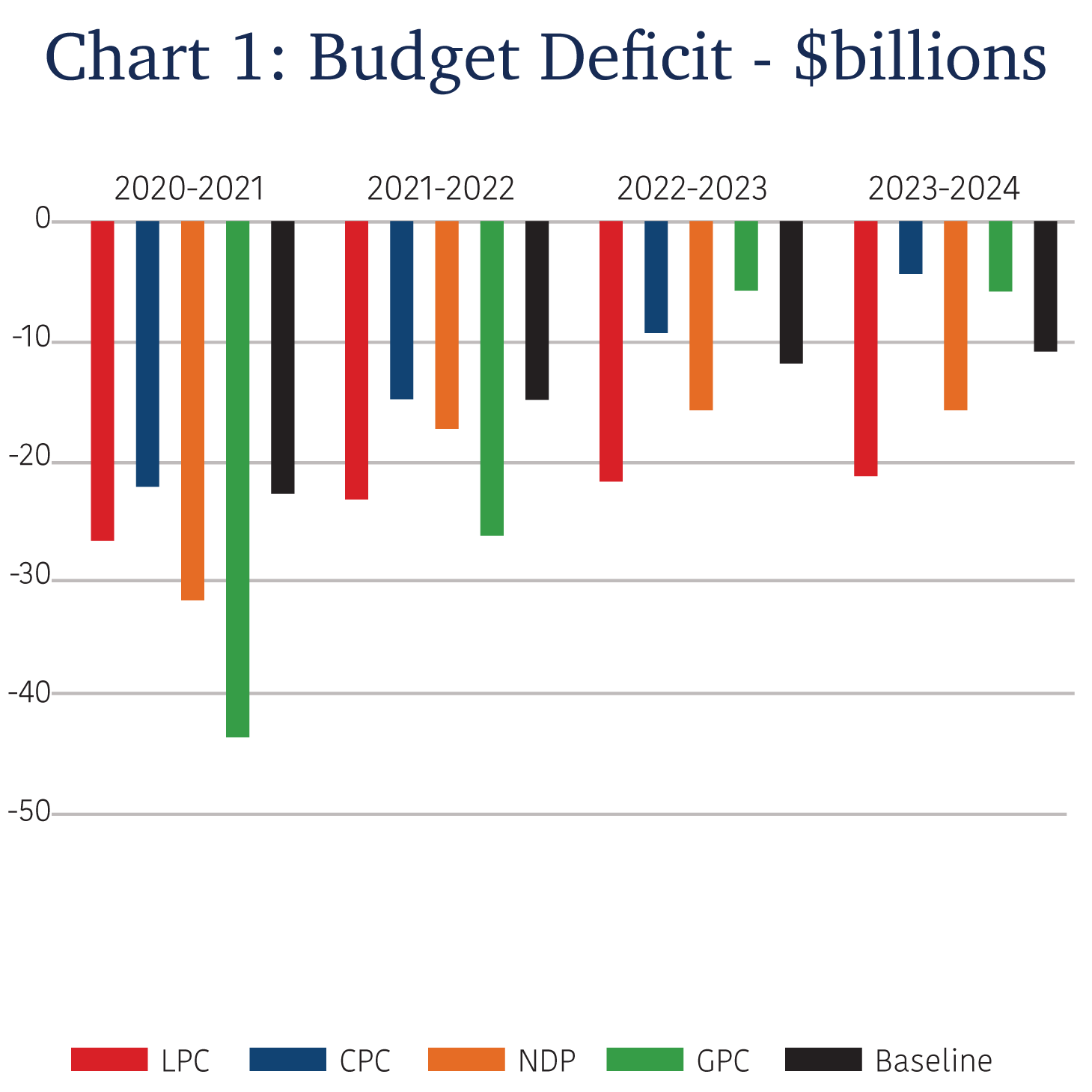 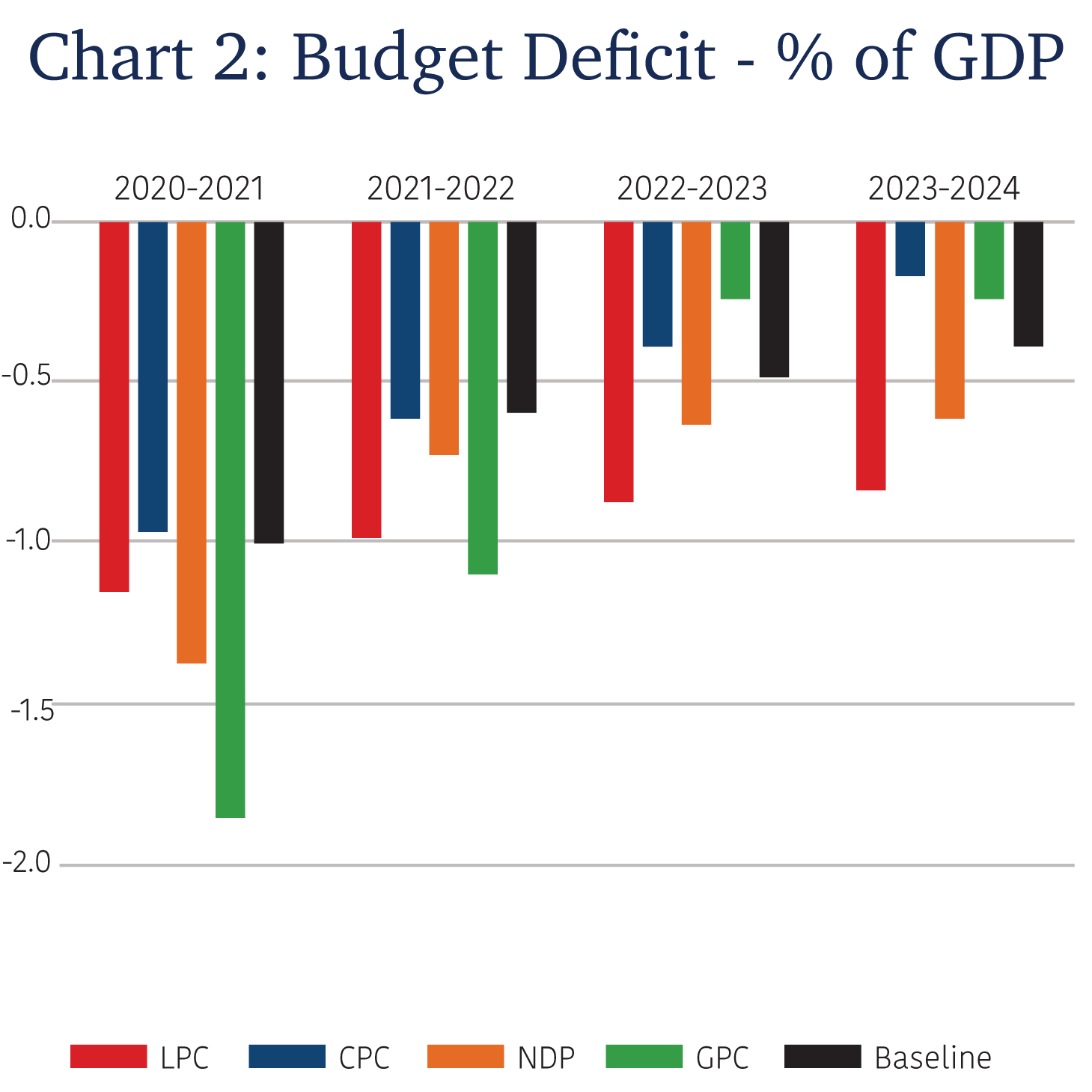 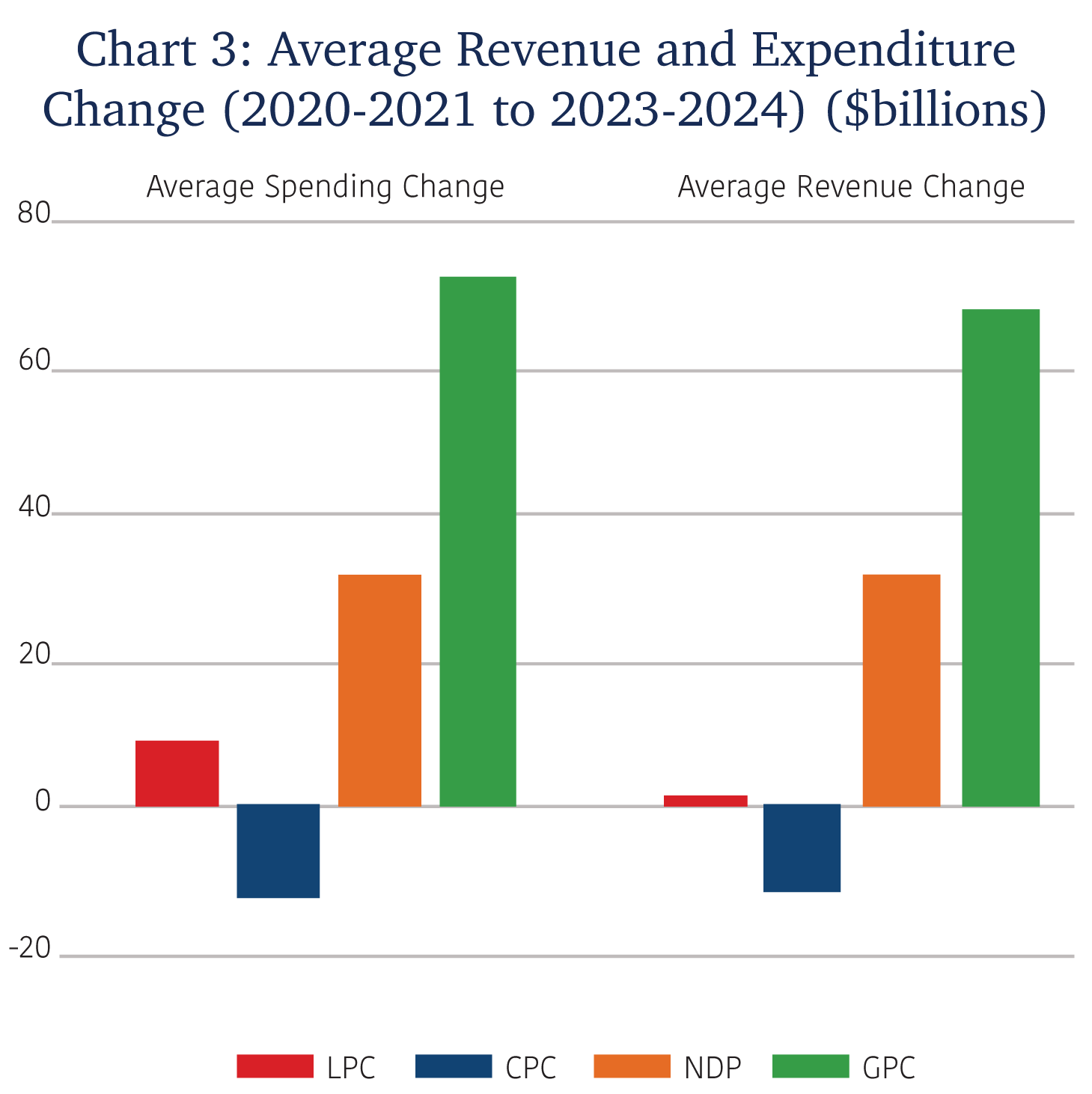 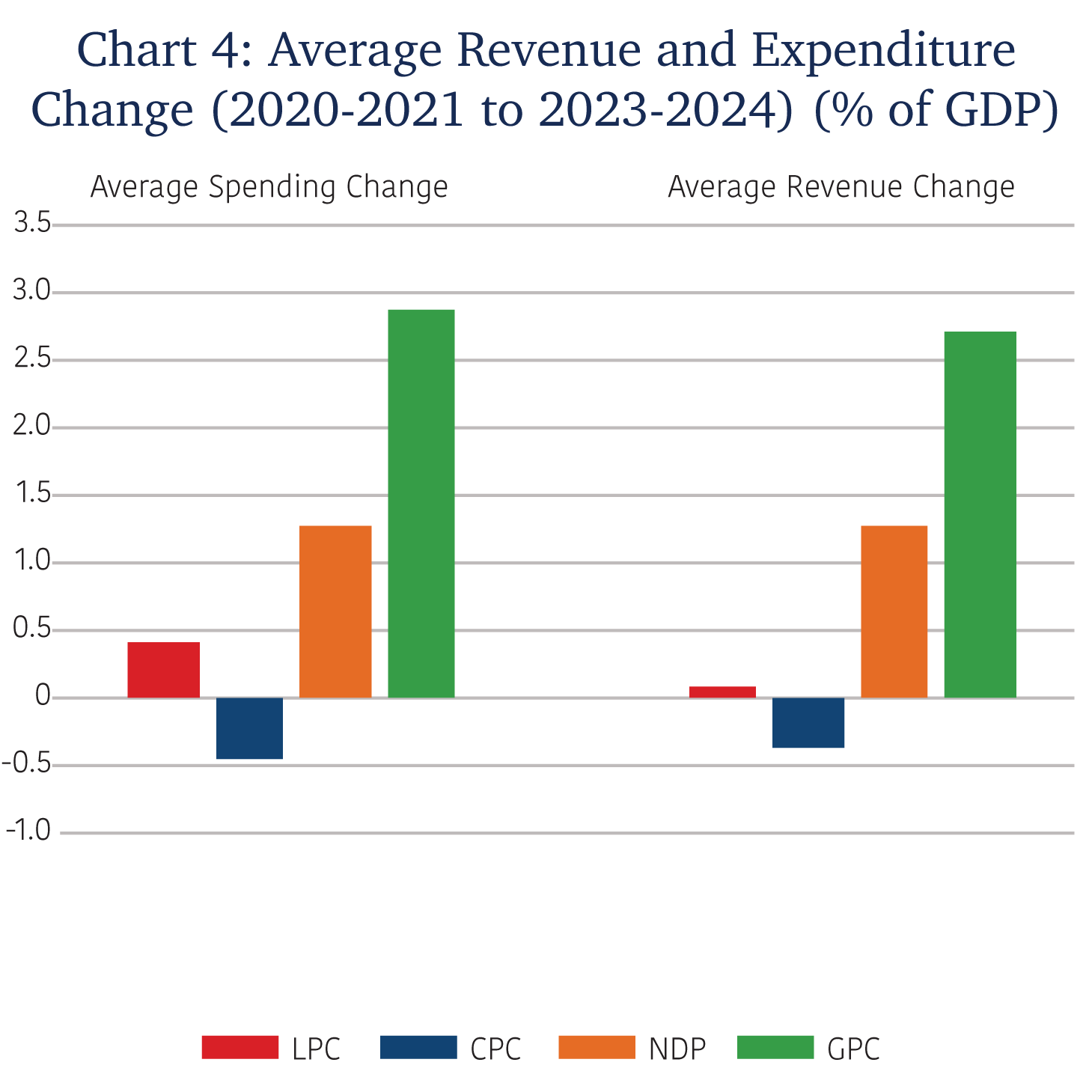 The key points to note are:

Are the platforms fiscally responsible? The LPC and the CPC have different approaches to fiscal management but neither platform puts Canada’s fiscal credibility at risks nor improves it markedly.While the NDP and the GPC show fiscal projections that are consistent with a fiscally responsible plan, they are subject to large risks that could damage the federal government’s fiscal credibility.

Do the platforms lead to unsustainable public debt levels?

As is shown above all parties are projected to run budget deficits over the next four years. This would lead to increases in the level of the federal debt.Some observers are concerned that the continuous rise in the debt level would reduce government’s flexibility in managing economic and fiscal shocks.This could be true if the debt rises much faster than GDP growth.

The following graphs show the projected federal debt in billions of dollars and as a per cent of GDP: 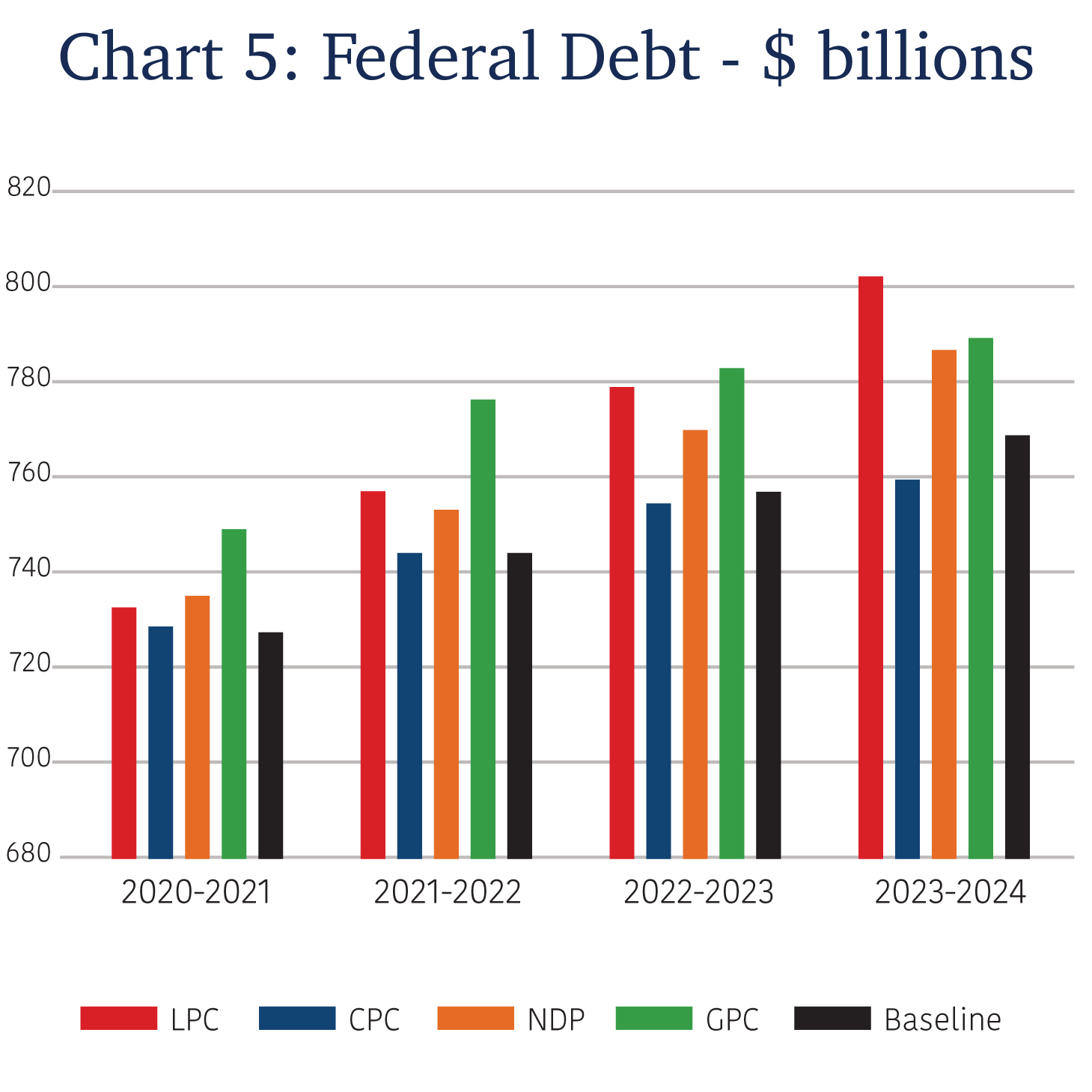 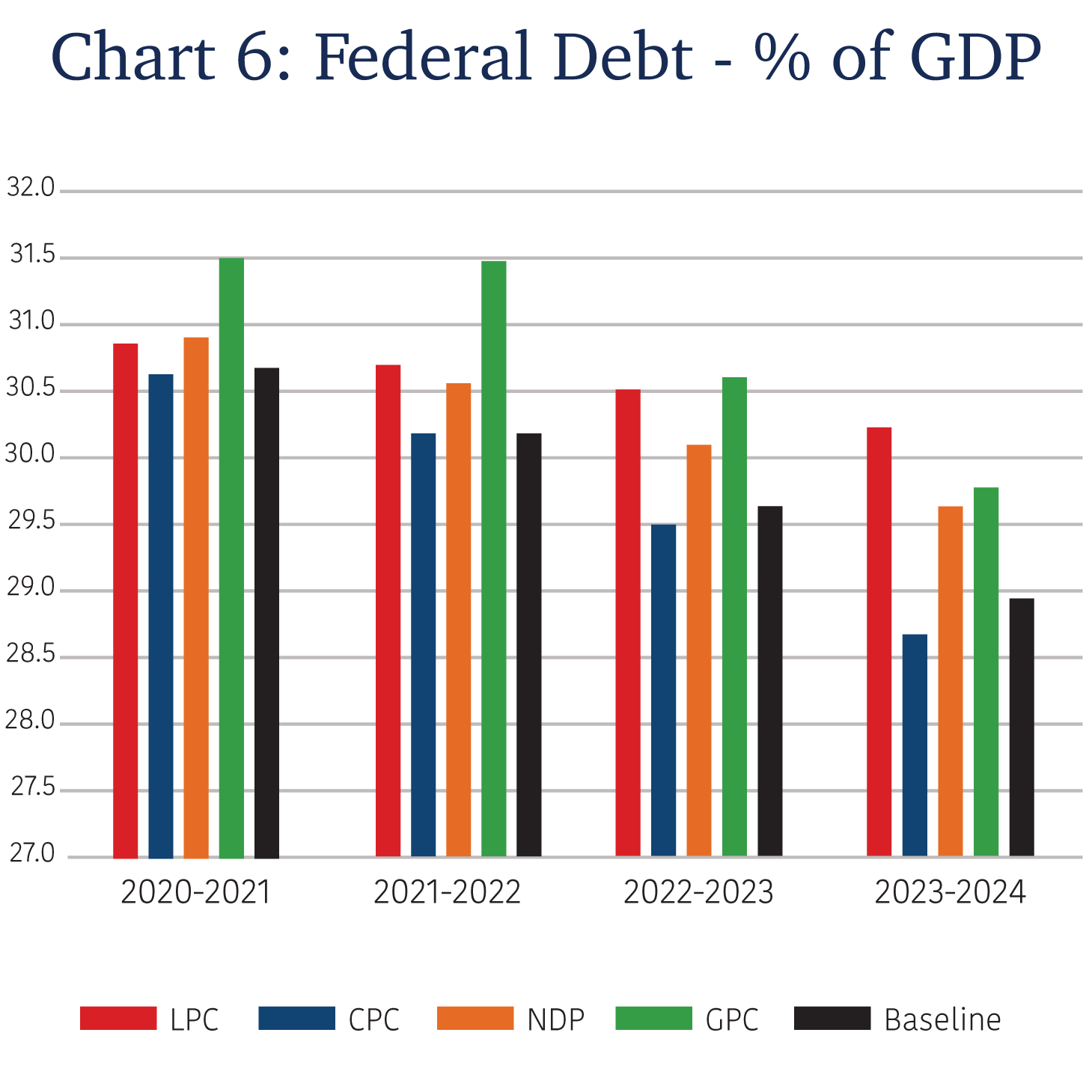 The key points to note are:

Given that all platforms show declining deficit and debt relative to GDP, all platform plans are consistent with long-term fiscal sustainability if they are successful in maintaining their projected fiscal track.

But maintaining the projected fiscal track is not automatic for any of the parties.For the Liberals, they will have to figure out how to address the Canadian Human Rights Tribunal decision on indigenous child welfare compensation as well as the funding gap for prevention.Pharmacare discussions with the provinces may also come to a head over the next four years.The Conservatives will have to have to find significant cuts to corporate subsidies and foreign development aid without the aid of a fiscal crisis to serve as an imperative for change.Concurrently, the Conservatives will have to find significant on-going operating efficiencies without major layoffs or service level impact, which have proved elusive for prior Liberal and Conservative governments.Meanwhile, the NDP and Greens have implementation challenges on both the revenue and expenditure sides of a scale that has few, if any precedents, in past governments.