This blogpost, originally published on January 9, 2018, has been revised to correct for a minor spreadsheet error. This error excluded the recently announced federal funding for home care and mental health from the calculation of program expenses from the 2017-18 through 2022-23 fiscal years. Correcting for this error increased the deficit by an average of $1.1 billion annually.

The Canadian economy entered 2017 with a bang, which led to substantially improved budget deficit forecasts in the federal government’s Fall Economic Statement (FES) 2017 than was anticipated in Budget 2017. However, 2017 looks to be closing with an economic whimper, meaning the boom times for the Canadian economy are likely coming to an end. Instead, it appears that 2018 and beyond will be characterized by the slow-and-steady pace of economic activity that Canadians have become accustomed to. And as a result of this more moderate economic performance, as outline in the Institute of Fiscal Studies and Democracy’s (IFSD’s) December 2017 Canadian Economic Forecast, the federal fiscal numbers are likely to wane along with it (Table 1). (For the IFSD’s more detailed federal fiscal forecasts, see Tables A through C.)

Of course, this is not the view presented by the Government of Canada in its most recent fiscal forecast (Chart 1). The federal government has instead assumed that, with revenues growing roughly in line with nominal GDP growth, budget deficits will gradually shrink on the back of controlled discretionary spending and low-for-long interest rates. 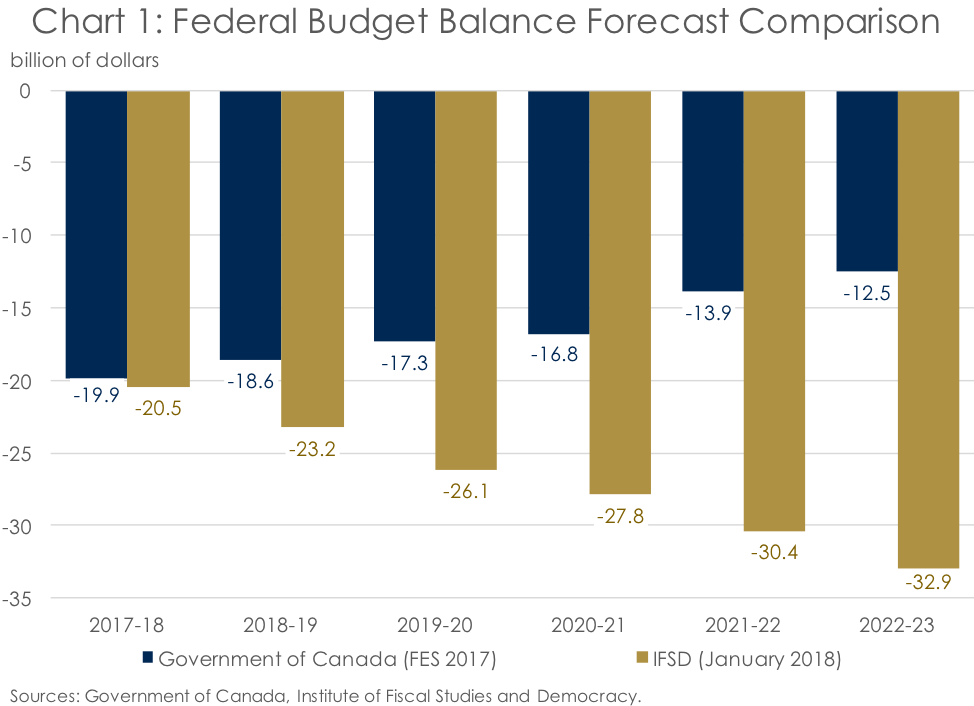 But how realistic are these assumptions? A little over half of spending by the federal government takes the form of transfers, either to individuals or other levels of government. And while these can change substantially, as we saw with the introduction of the Canada Child Benefits or the reduction in the Canada Health Transfer (CHT) escalator, they are generally more glacial in their evolution. Instead, it is changes in Direct Program Expenses (DPE) that is subject to the biggest swings, depending on how a government has decided to turn the fiscal tap. For instance, the previous government under Prime Minister Stephen Harper famously decided to open the fiscal floodgates at the outset of the Great Recession, at the behest of Her Majesty’s Official Opposition, only to slam the gates shut afterward in an attempt to return to balanced budgets (Chart 2). Notably, the profile for DPE growth under Prime Minister Justin Trudeau is expected to follow a similar profile. For instance, the first few years of the current Liberal mandate has been characterized by fiscal largesse. However, the final five years (all of which are forecasts from the FES 2017, and so some are beyond the current mandate), are projected to be what one could think of as a ‘soft austerity’, meaning growth will remain positive but well below the historical pace. Indeed, growth in DPE is projected to be below that of even inflation. 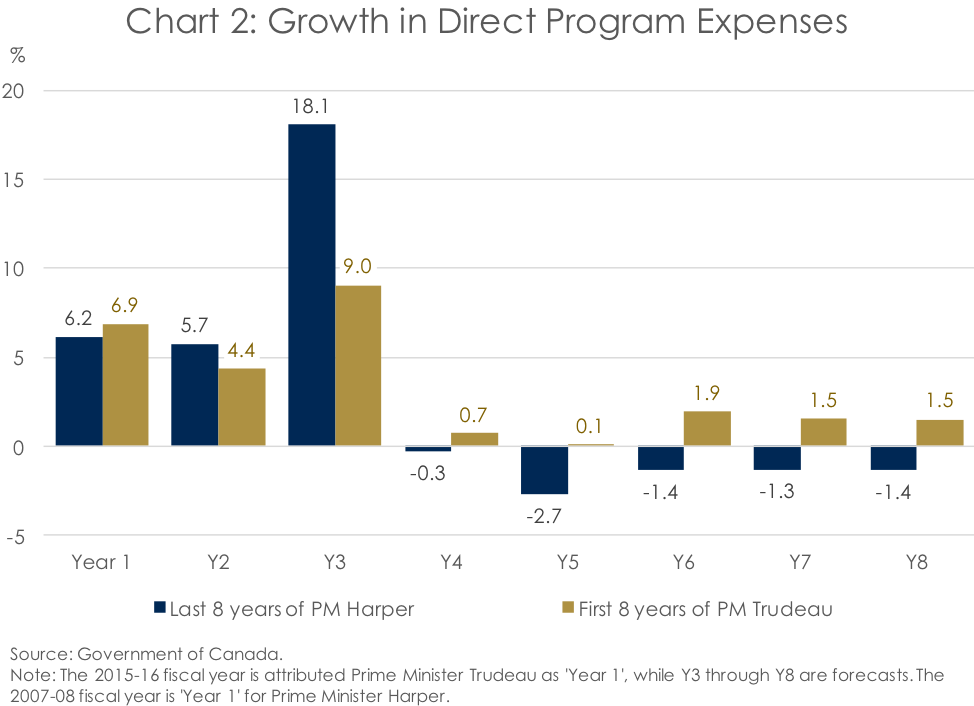 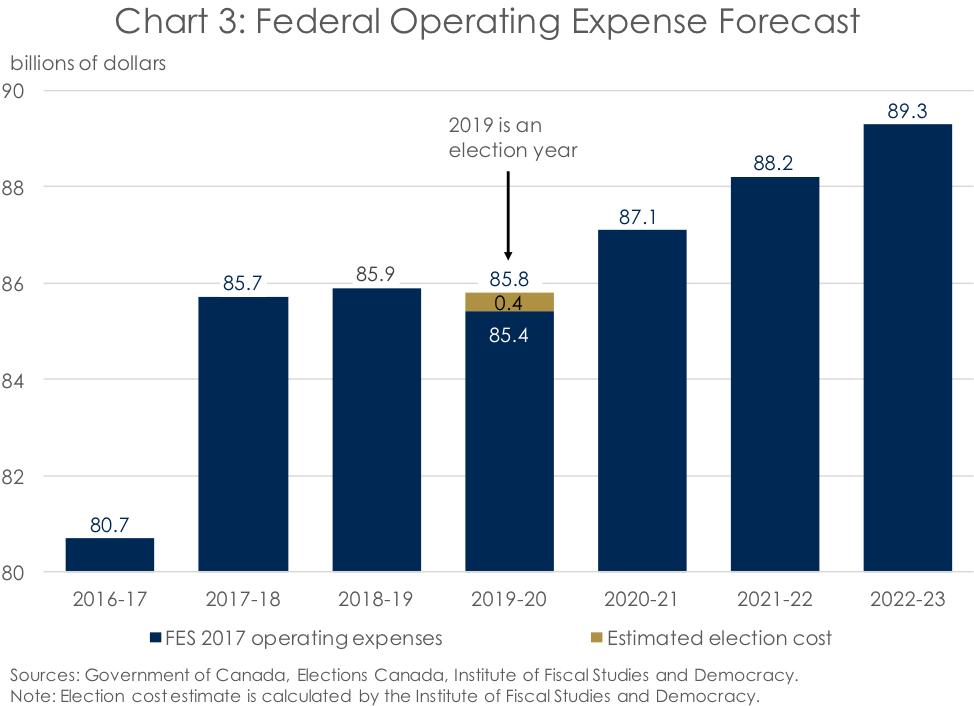 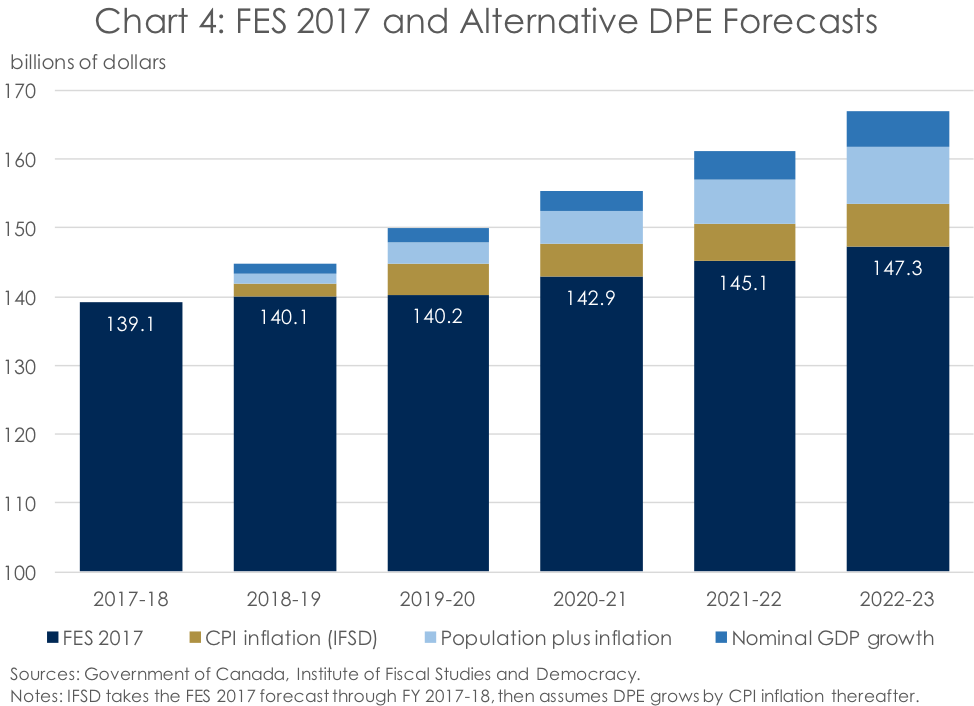 The second area where the IFSD’s fiscal forecast differs considerably from the federal government’s is in regard to public debt charges. Notably, while the IFSD revised its yield curve forecast considerably lower in its December 2017 Canadian Economic Forecast, it remains modestly higher than the Government of Canada’s. As a result, the IFSD’s effective interest rate – calculated as the total amount of interest paid as a share of gross interest-bearing debt – is also slightly higher. But there are also differences in the long-run assumptions of the IFSD and Government of Canada. Specifically, the IFSD has projected that the long-run effective interest rate on debt converges to around 4.0%, while the Government of Canada has forecasted this value at 3.8% (Chart 5). 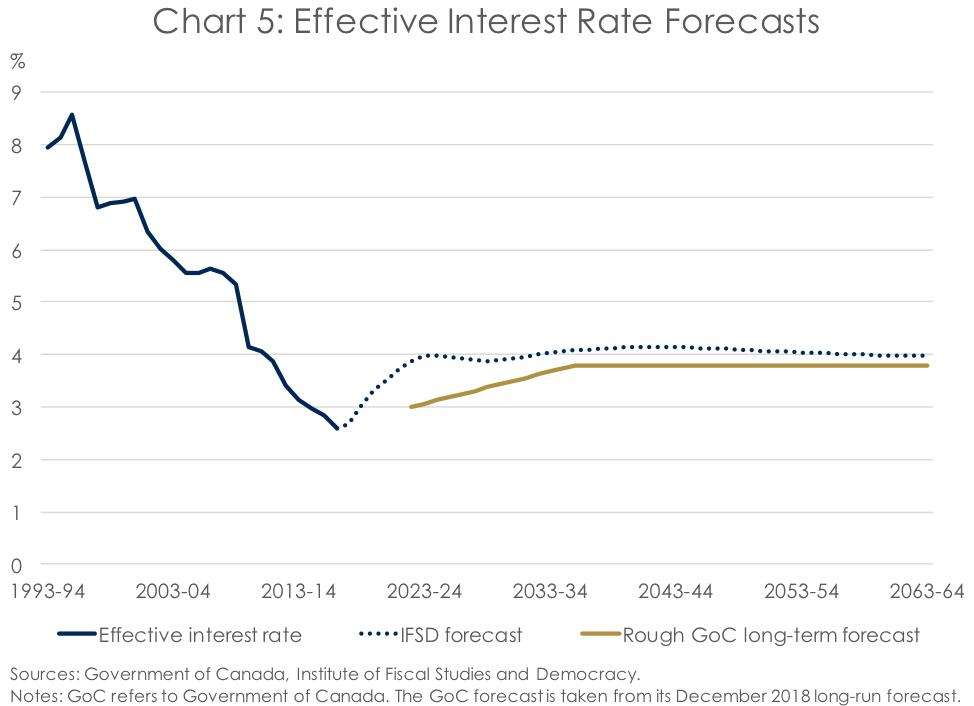 The IFSD’s modestly higher effective interest rate profile, combined with smaller primary surpluses due to the IFSD’s lower revenue and higher program expense forecasts, therefore leads to the IFSD’s more elevated public debt charge forecast (Chart 6). As a result, the IFSD’s forecast for federal debt is also greater than the federal government’s, both in absolute and debt-to-GDP terms (Chart 7). Indeed, in contrast to the Government of Canada’s fiscal forecast, the IFSD is projecting that the federal debt-to-GDP ratio will rise toward the end of the 5-year outlook. 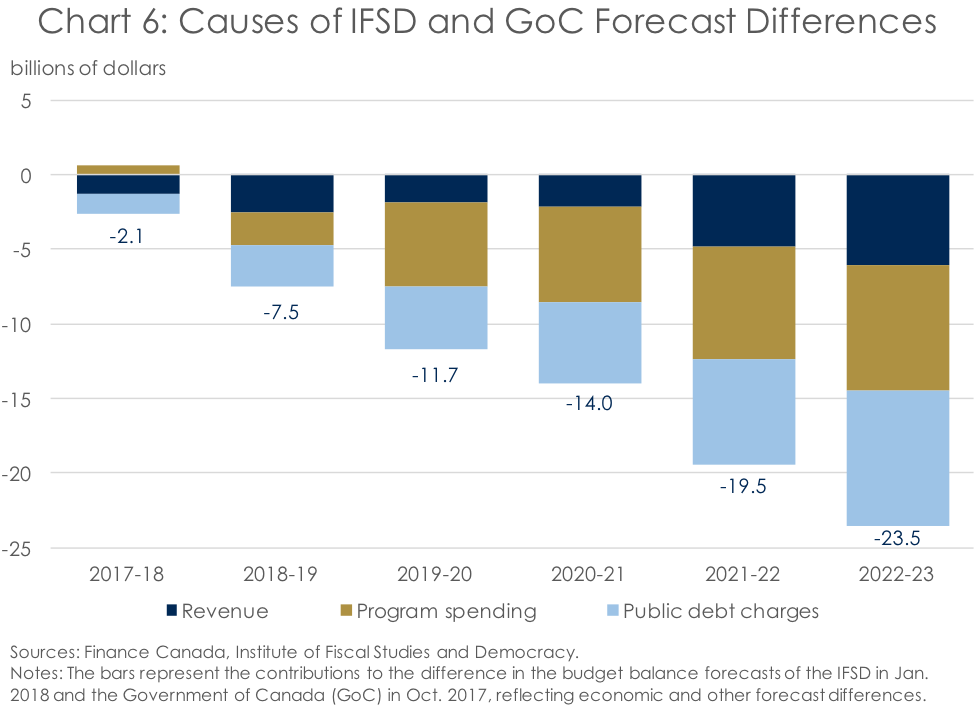 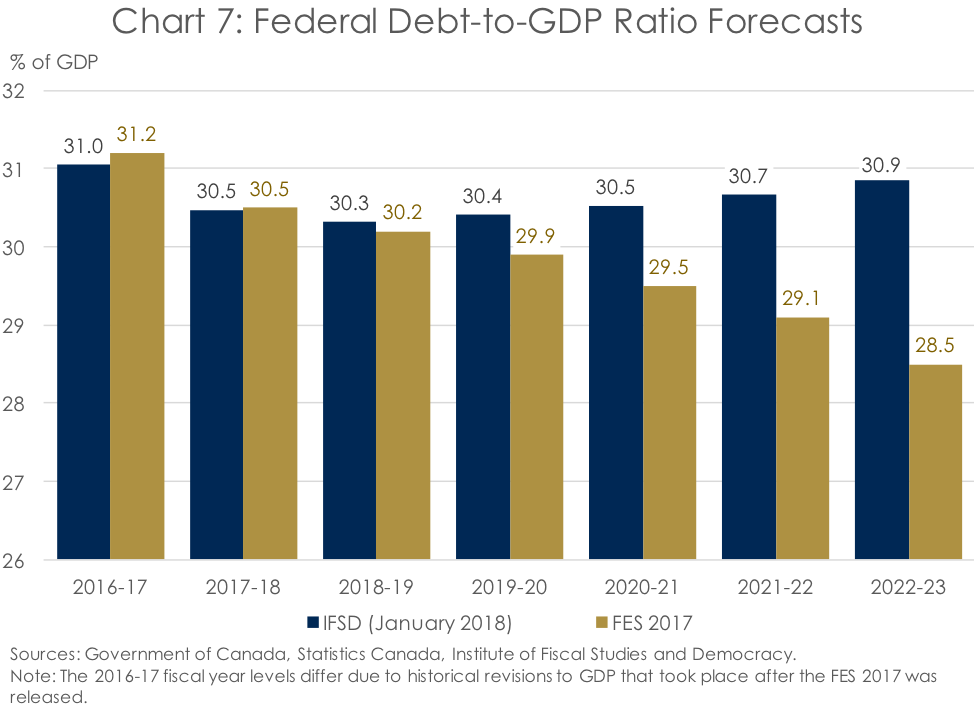 Despite the IFSD’s larger deficits over the next five years, the conclusion reached in its 2017 Fiscal Sustainability Report – that the federal government’s finances are fiscally sustainable – continues to hold true. This supports the findings of both the Parliamentary Budget Officer and the federal Department of Finance itself (Chart 8). However, none of these analyses account for commitments tied to recently-announced, long-term, big-spending policies, such as defense and the National Housing Strategy. Adding these discretionary measures to the forecast suggests that the federal government is chipping away at its hard-won fiscal sustainability with each new spending announcement. Further, the fact that the federal Department of Finance chose to release this analysis the afternoon of the last business day before Christmas suggests it wants these projections to see as little daylight as possible. Instead, for transparency, it is the IFSD’s view that the federal government should return to publishing its long-term economic and fiscal projections along with the Fall Economic Statement, as was the practice of the prior federal government. 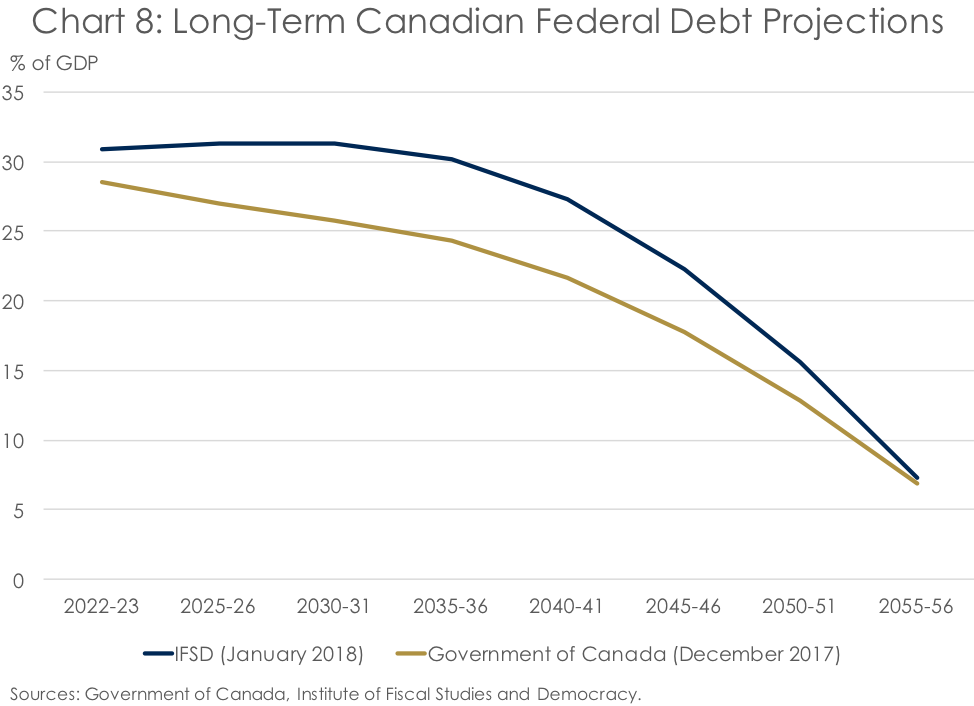 It’s been a good year for the federal government, with an upside surprise to economic activity having supported a better-than-expected fiscal outlook. But the outsized economic gains are well in the rear view now, and the fiscal forecast will ultimately come up against that same reality. As a result, the IFSD’s outlook for revenues, expenses, and public debt charges are all less optimistic than the federal government’s, and consequently the federal debt outlook as well. In particular, the Government of Canada’s outlook for Direct Program Expenses requires a suspension of disbelief beyond the usual leap of faith needed to swallow any government’s fiscal forecast. We can only hope that the upcoming Budget 2018 will clarify how the federal government plans meet this ambitious target for ‘soft austerity’, particularly during the 2019 election year, in order to start returning the federal books toward balance. 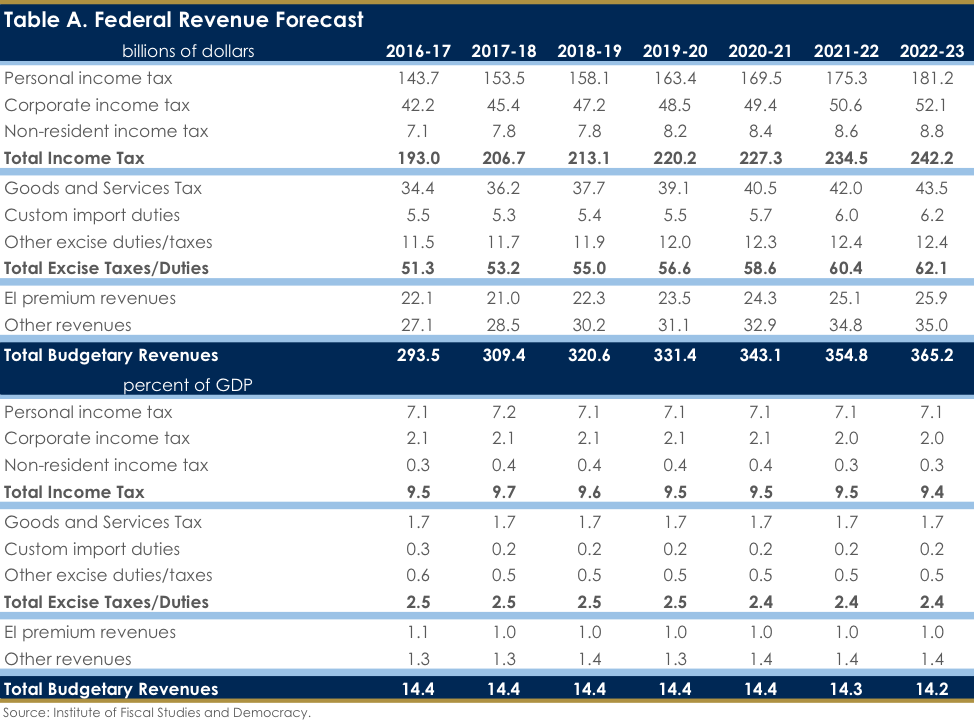 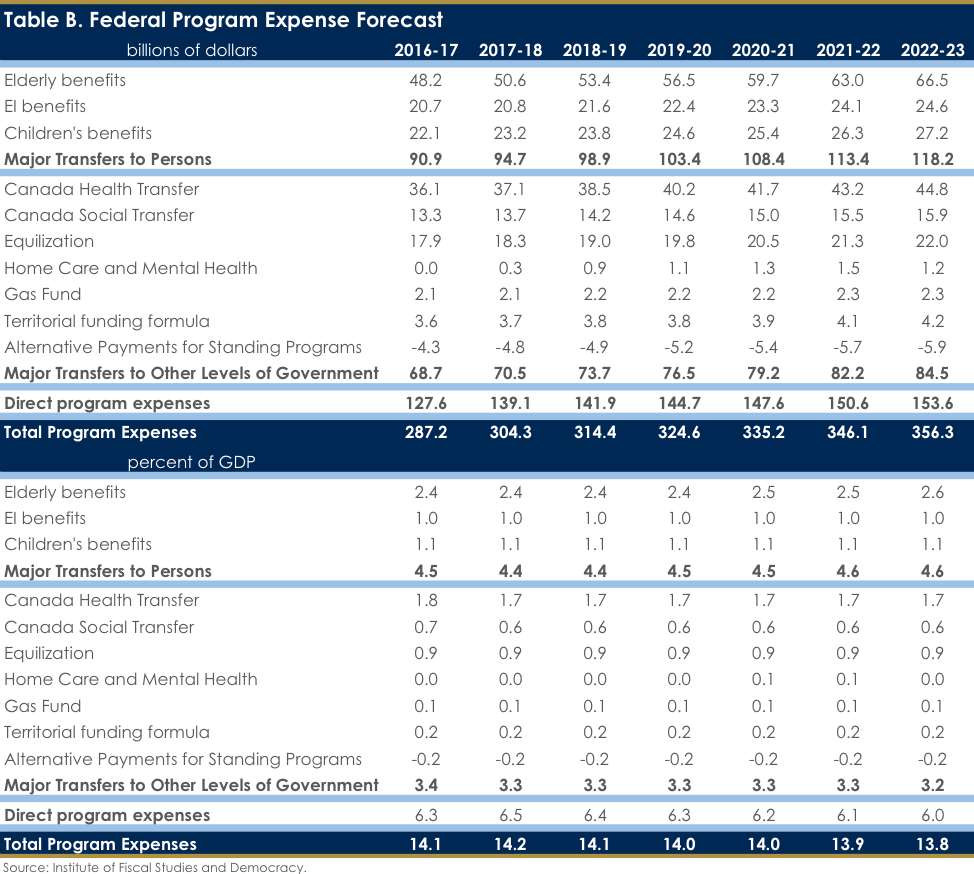