Canadian Economic Forecast: Canada is Turning 150 with Reason to Celebrate

Canada turns 150 years old in a few short weeks, and it looks like the party that’s been going on for a while isn’t going to stop any time soon. Indeed, in the three quarters starting in Q3 2016, real GDP in Canada has experienced average quarterly growth of 3.5% annualized - a solid performance by any measure (Chart 1). To put this in perspective, growth in the US has been a more modest 2.2% over the same period. Mind you, some of the Canadian strength reflects a rebound following the negative economic impact of last summer’s devastating wildfires in Alberta. But recent growth has been more broad-based than we’ve seen in a while. And with @NowcastCanada tracking 2.0% annualized growth in Q2 2017, this above-trend print is helping to put the Canadian economy on track to hit 2.6% real growth in 2017 – the strongest advance since recovering from the Great Recession. Meanwhile, the U.S. economy is on track to advance by 2.2% this year – not bad but nowhere near the pace of its syrup-sipping cousin to the north. 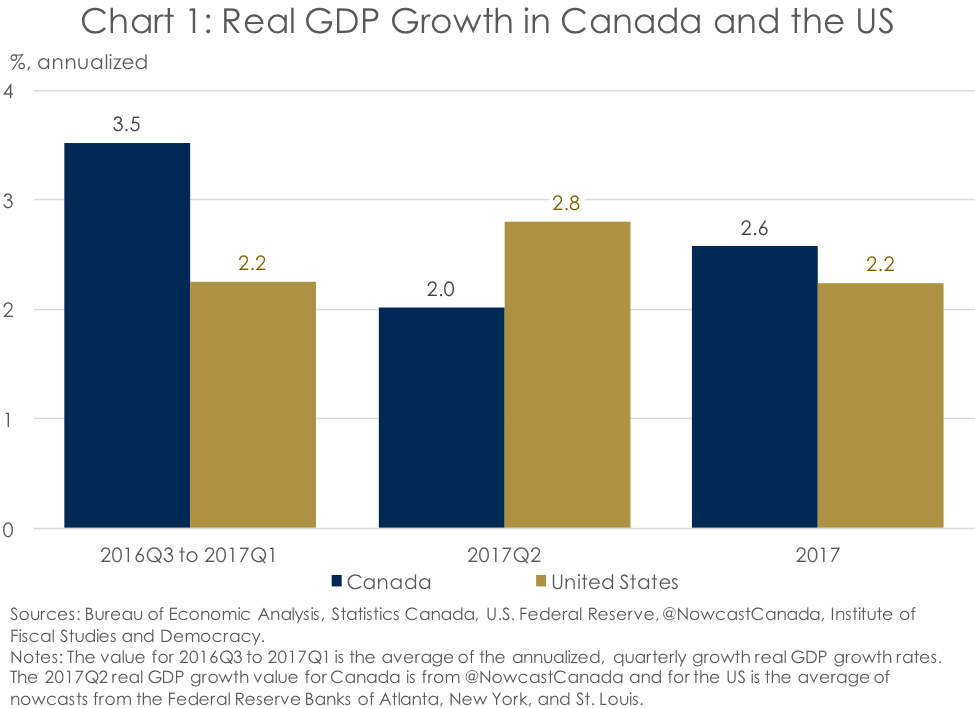 But the party can’t last forever. Eventually, parents come home and take the fun stuff away. Indeed, markets are now speculating seriously that the Bank of Canada Governor Stephen Poloz will start to pull the trigger on interest rate hikes sooner than later. What was once an event expected to take place well into the distant future, it has now become a near-term reality. Indeed, because of the stronger-than-expected economic performance in Canada, the Institute of Fiscal Studies and Democracy (IFSD) has moved up its expectation for the Bank’s first rate hike to January 2018. And other forecasters are even more hawkish than that. The reason is clear. By most measures, the output gap in Canada is closed or very close to it, while the labour market continues to surprise on the upside. That means it’s just a matter of time until wage growth and inflation start to edge higher (Chart 2). This is this line of thinking that has compelled the U.S. Federal Reserve to continue gradually hiking interest rates, and this same logic is likely to start to migrate northward as the year progresses. 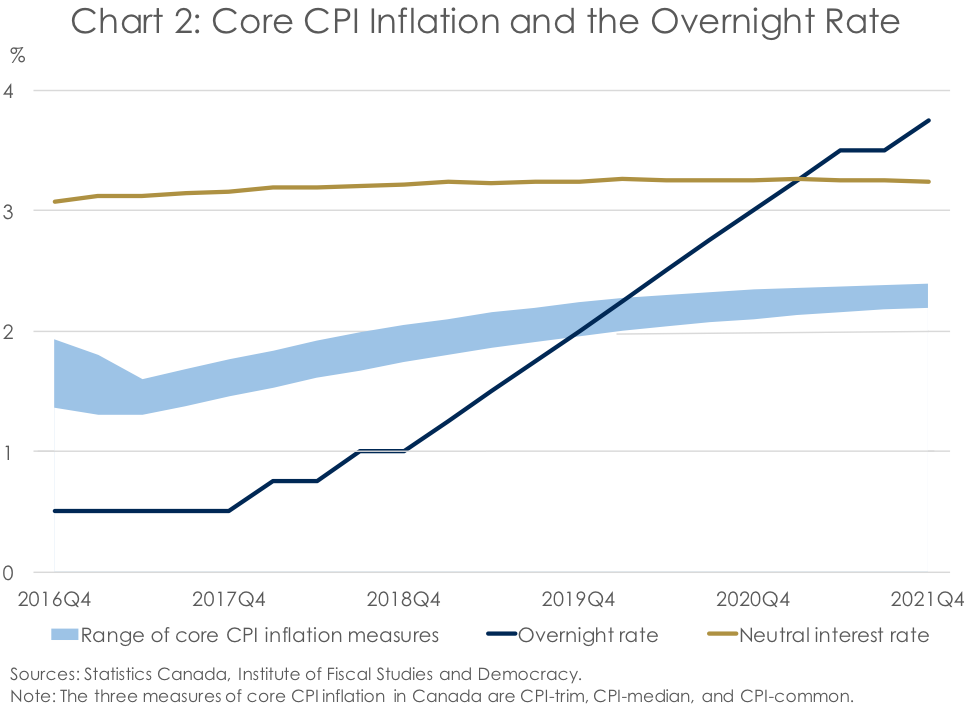 Indeed, the impending Bank of Canada hiking cycle comes at an interesting time. Only a few years ago, the housing markets of Calgary, Vancouver, and Toronto were at the top of the Bank of Canada’s list of financial system vulnerabilities in Canada. However, with the drop in oil prices, the Calgary housing market very quickly fell off the Bank’s radar. Then came the Vancouver market, which slowed following the introduction of a foreign-buyers’ tax in the summer of 2016 (although it has since regained some ground). This was soon followed by measures introduced at the federal level in the autumn of that year. Then, to put the icing on the national housing market cake, the Government of Ontario introduced 16 new measures in April 2017 to cool the Ontario housing market, but most specifically that of the Greater Toronto Area (GTA). And it appears to have had its intended result, as both residential units sold and the average sale price of existing homes in the GTA pulled back aggressively in April and May of 2017 (Chart 3). Taken together, these numbers suggest that we may finally be getting the cooling in the Canadian housing market that economists have been anticipating for some time. 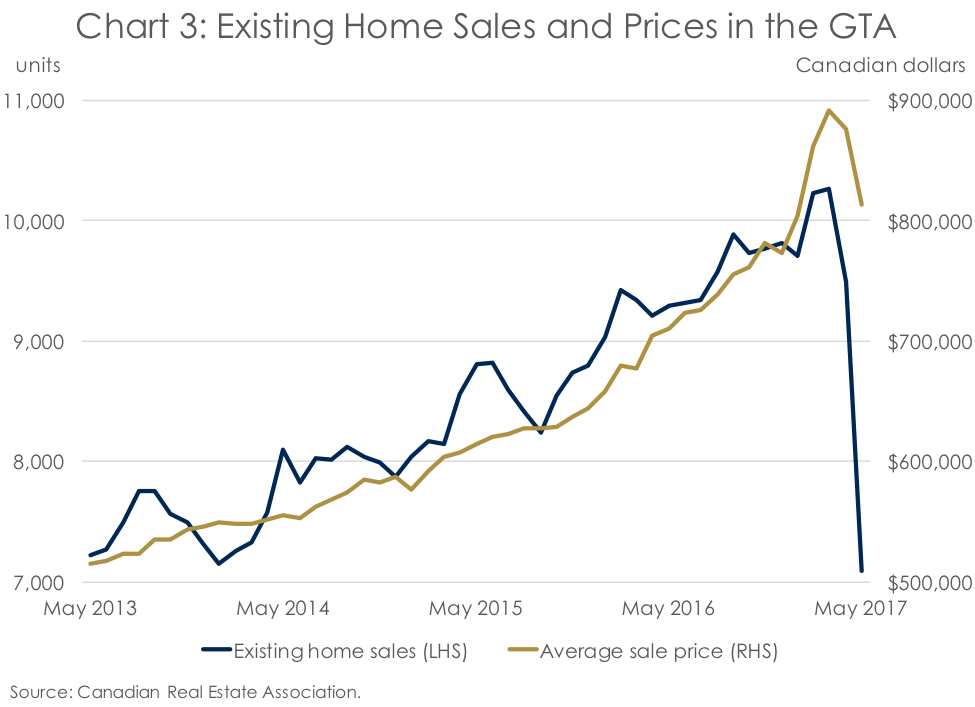 So, with residential investment expected to pull back as a driver of growth going forward, the relevant question becomes: Can the Canadian economy continue advancing at its current break-neck past and, if so, what will the drivers be? In the near term, household consumption is expected to remain a contender, but it too should slow along with the impending moribund advance in housing wealth (Chart 4). 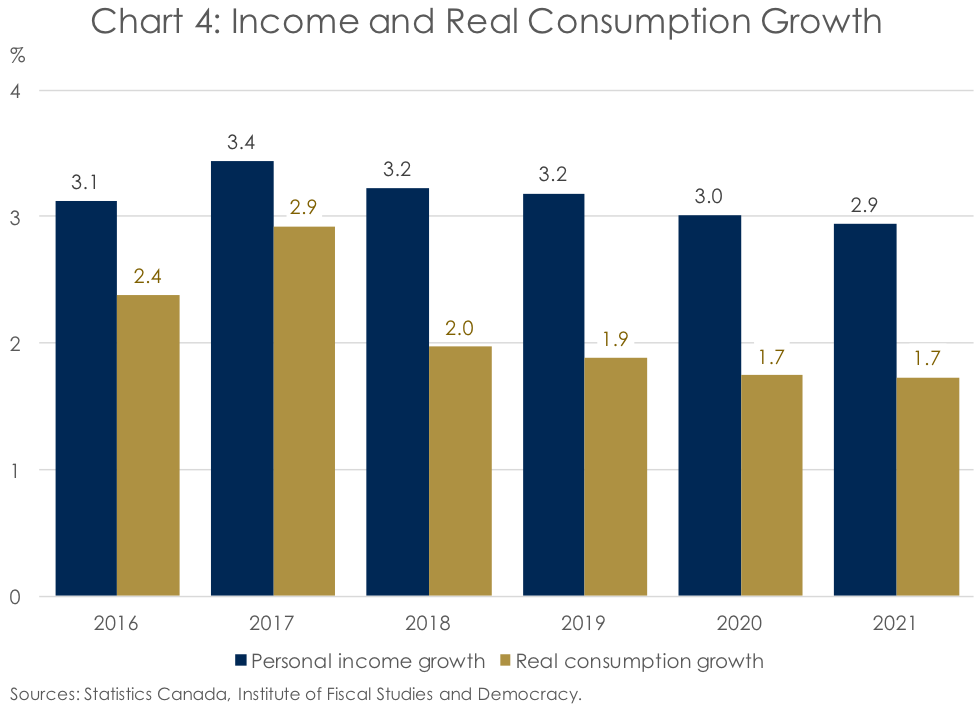 Fortunately, with the U.S. economy forecast to post some decent growth numbers over the next couple of years (see Table A), the long-anticipated and nearly-abandoned rotation away from housing and consumption toward trade and investment is likely to begin. Indeed, if the recently-announced renegotiation of the North American Free Trade Agreement (NAFTA) doesn’t turn into an absolute circus (don’t hold your breath in anticipation of a positive outcome), Canadian exports should advance in line with economic activity stateside (see Chart 5). This is likely to lead to an increase in hiring until capacity becomes so constrained that it requires renewed business investment. And while higher imports to support this strength should dampen the gains somewhat, this is an all silver-lining outlook. It’s a virtuous cycle that was elusive until recently, but now seems to be within reach, as long as cooler heads prevail in the good ole US of A. 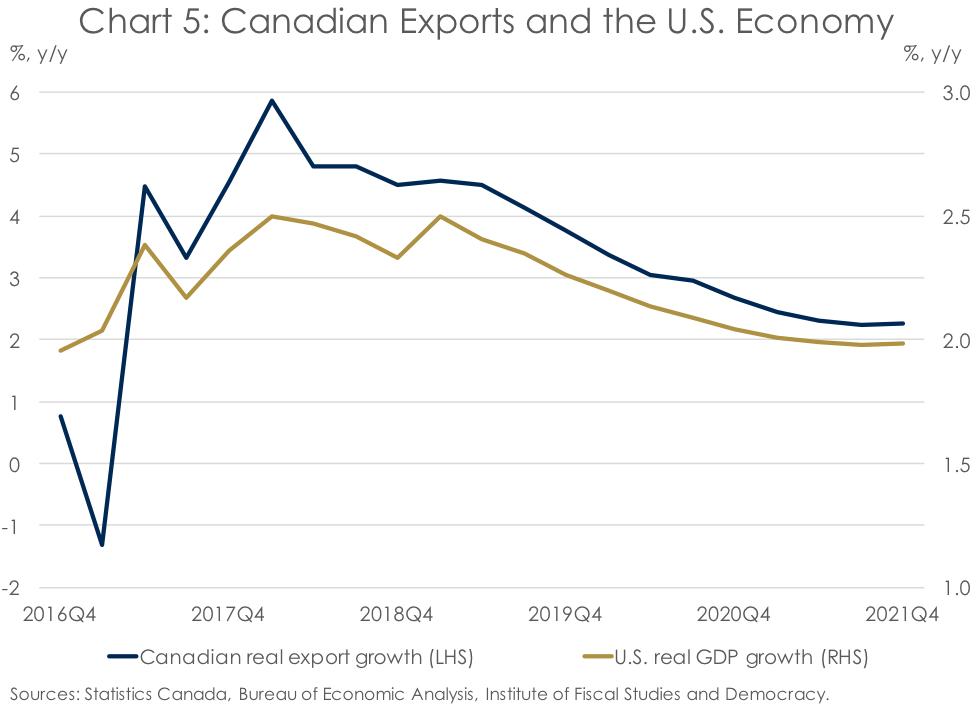 However, it should be noted that, in the aggregate, the gains to trade and business investment aren’t likely to be enough to fulling offset the weakness in consumption and residential investment. As a result, real GDP growth is expected to slow after 2017, as the Bank of Canada hikes rates and the Canadian economy comes back down to earth. Indeed, even the economic impact of the federal government’s infrastructure plan is likely to be so drawn out that it won’t produce much short-term bang for the buck (see Chart 6). As such, the positive output gap that is likely to characterize the Canadian economy in 2017 is forecast to gradually shrink over the next five years (see Table B). But for now, Canada, let’s party like it’s your 150th birthday. Because it’s 2017. 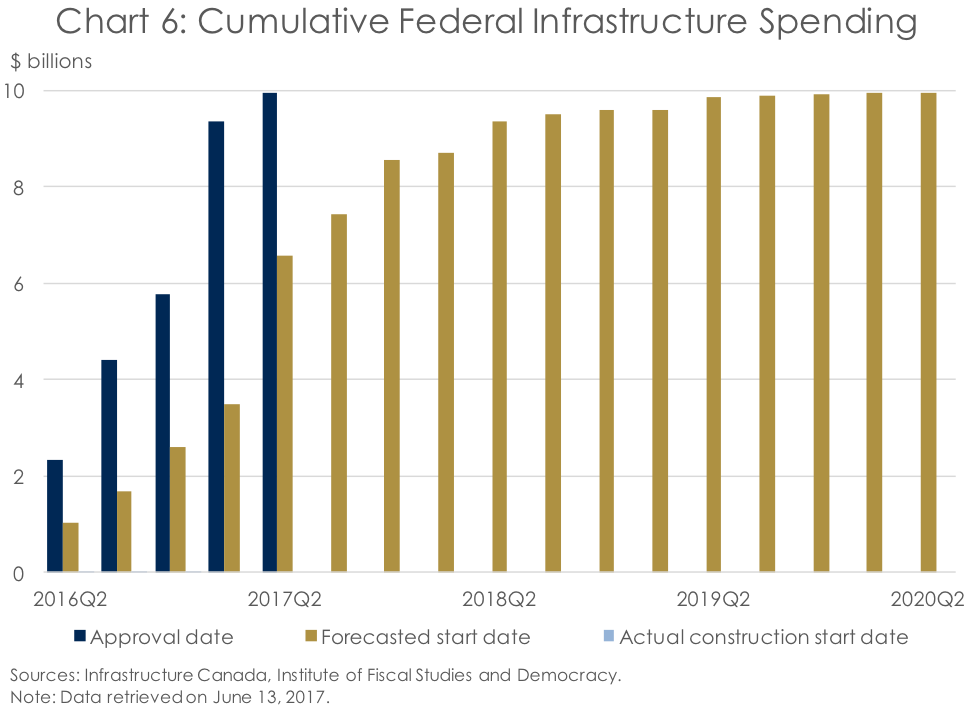 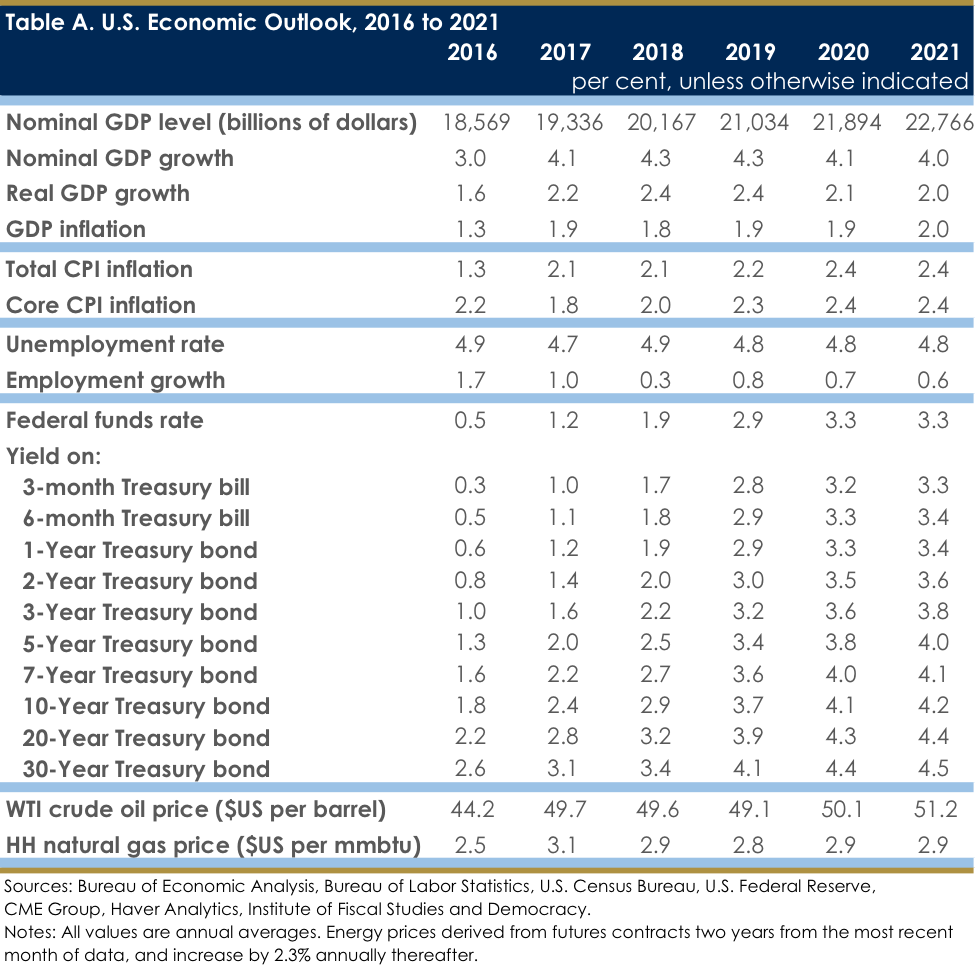 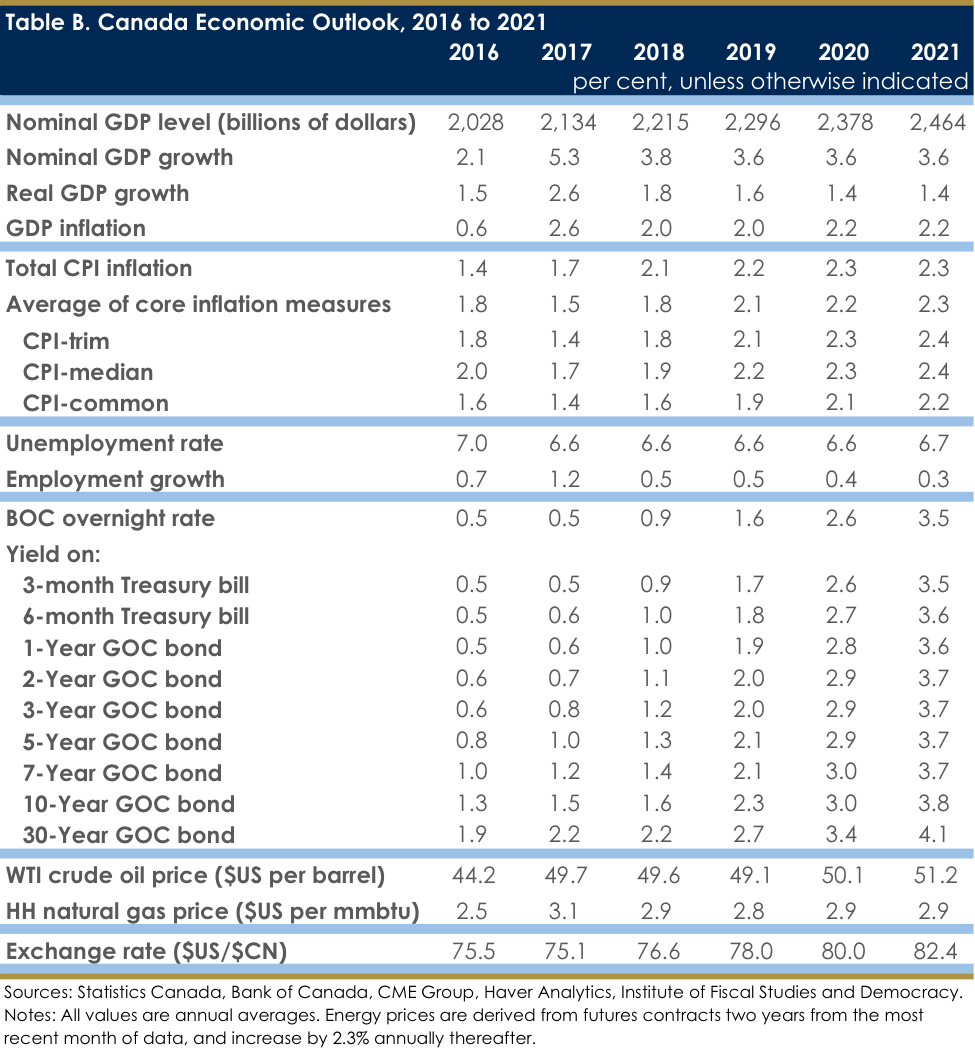