A New Look at Old Funding: How Ontario Funds Its Biggest Departments

by Alex Reeves and Randall Bartlett

Ontario is the largest province in Canada, both by population and by GDP. In the 2016-17 fiscal year, Ontario spent nearly $140 billion on over a hundred programs spanning more than thirty ministries and departments. Chart 1 illustrates the Government of Ontario’s budget expenditures of $136 billion in fiscal 2016-17, spread across what are known as ‘standard objects’ (SOs). Notably, while close to $25 billion is spent by the ministries on things like salaries and other operating expenses, over 80% of the $136 billion in budget spending is in the form of transfer payments. Transfer payments move money from the provincial government to various other levels of government, non-governmental groups, and individuals. These groups can include municipalities as well as smaller entities such as school boards and regional healthcare providers, and also people. 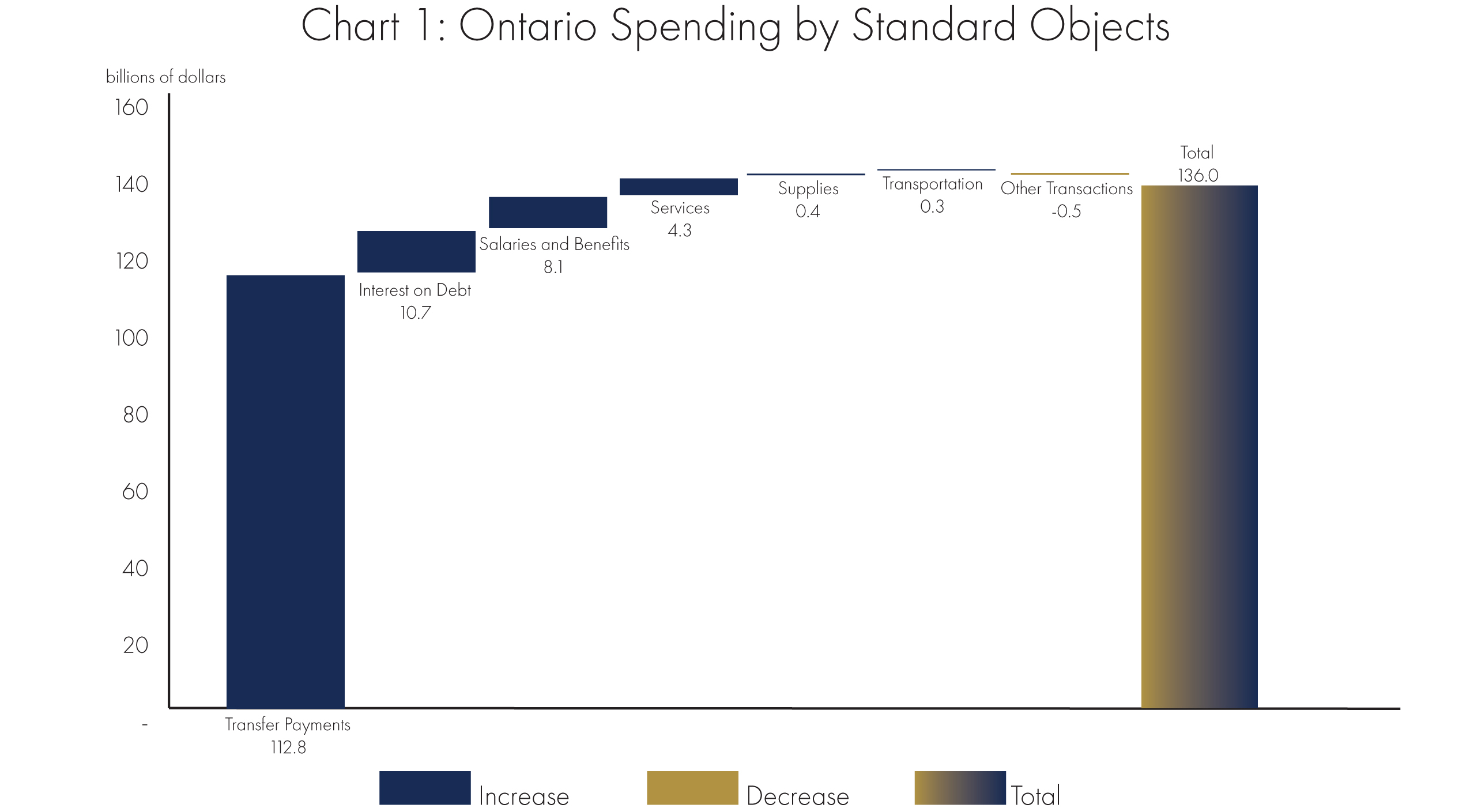 While the SOs breakdown gives a good picture of how the government works at its highest possible level, it glosses over where most of the money is going and what it's being used for. To better understand the way that these transfer payments are structured and what they are used to fund, the actions of the individual departments must be looked at separately from the whole of government. 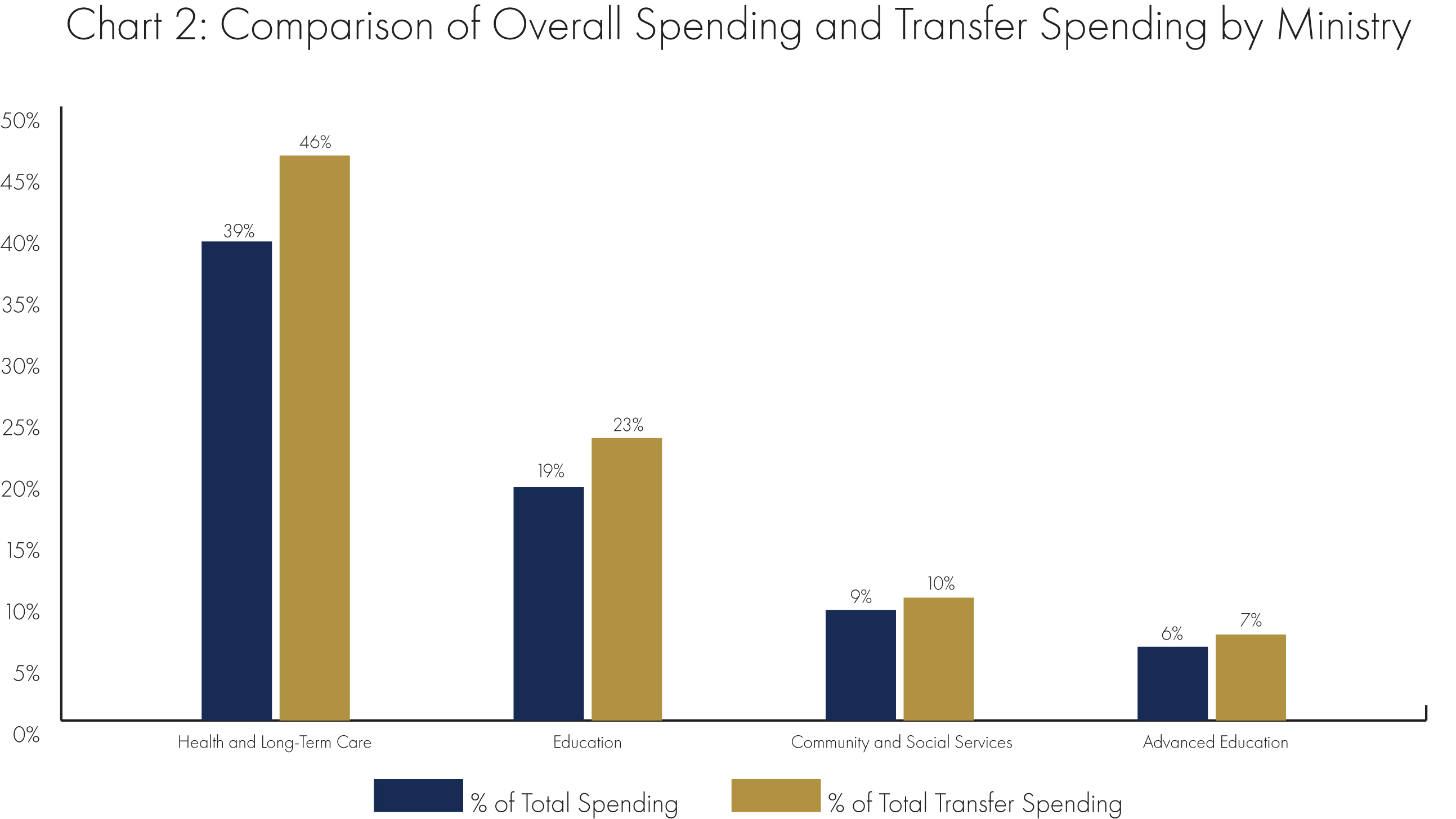 More specifically, the four largest ministries in the province of Ontario are Health and Long-Term Care, Education, Community and Social Services, and Advanced Education. Together, these four ministries account for over 73% of all provincial spending and 86% of all transfer payments in the 2016-17 fiscal year. Chart 2 breaks down the share that each of these departments spend in relation to both total government spending and total transfers.

The fact that this small number of ministries spends so much money may not come as a surprise to many but does leave one wondering: Where does the money actually go? With this question in mind, we sought to do a deep-dive into the spending base of these four departments, pulling together information from separate departmental reports and databases in order to show how money flows from Queen’s Park.

Ministry of Health and Long-Term Care

The Ministry of Health and Long-term Care (MOHLTC) spends approximately $53 billion a year across its various transfer payments and overhead costs. A majority of all MOHLTC spending is directed to programs that then transfer the funds to regional entities or directly to practitioners. The most well-funded programs––Ontario Health Insurance Program (OHIP), Local Health Integration Networks (LHIN’s), and Provincial Programs and Stewardship––account for around $48 billion of the MOHLTC’s budget.[i]

As shown in Chart 3, OHIP is predominantly made up of payments to physicians and the Ontario Drug Program. This funding is used to lower the price of many drugs and also to pay for the services and care provided by physicians and practitioners.

The LHIN program breaks transfers down by each of the major networks which represent large population centres. There are fourteen separate LHINs––for example, Toronto Central, Waterloo Wellington, and Erie St Clair. Each LHIN then transfers money to hospitals and other healthcare providers that are most prevalent in the LHIN.[ii] While the composition of health care institutions varies from region to region, the money is predominantly directed to the staffing and upkeep of hospitals, community health centres, and long-term care homes. The “other category” in Chart 3 includes expenditures such as payments made to department heads, psychiatric care, and addictions programs.

The final major area of expenditure is made in the Provincial Programs and Stewardship budget, where the largest amount of funding goes to cancer care, with second-order spending items such as ambulances and blood services.

Chart 3: Expenditures by the Ministry of Health and Long-Term Care 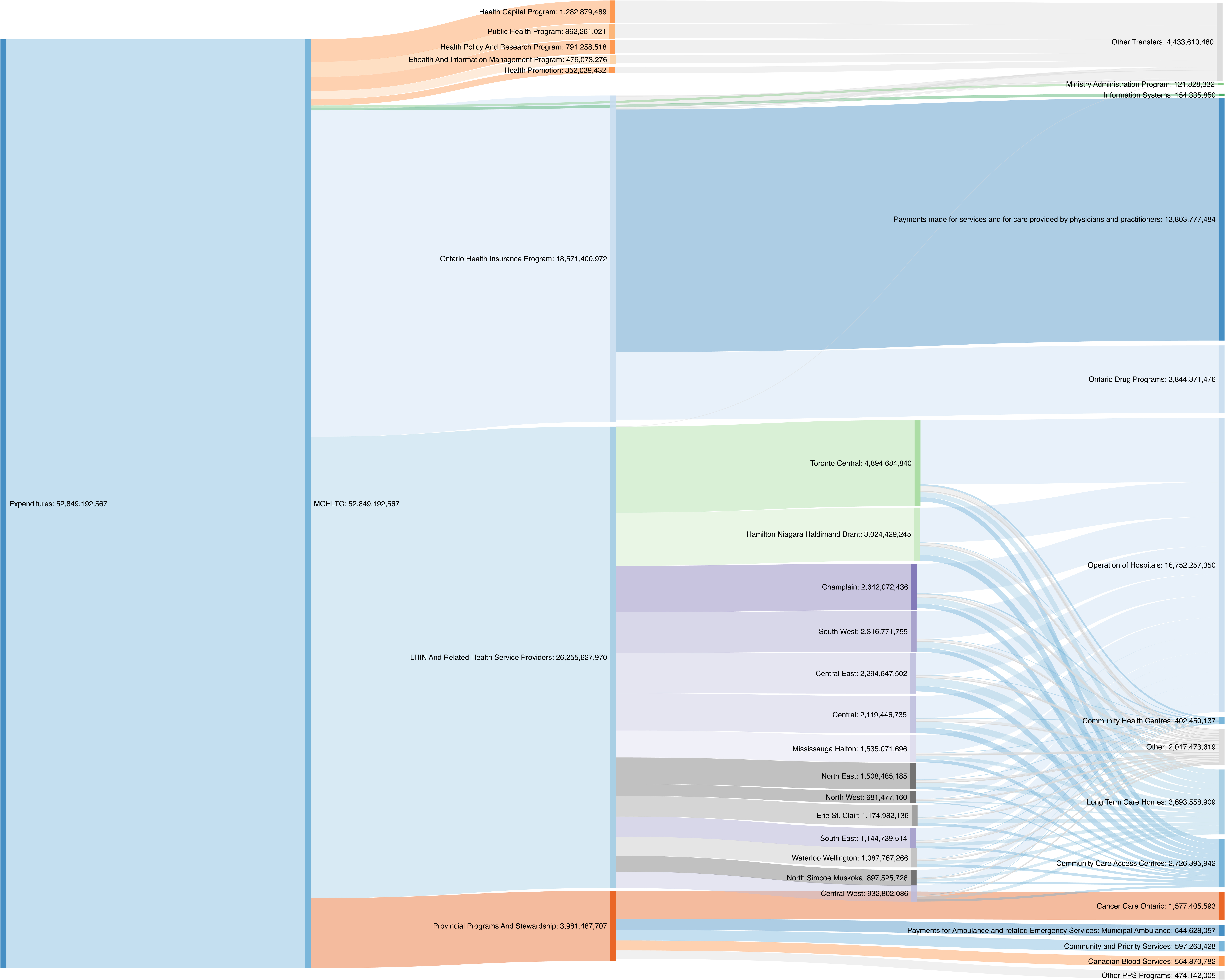 Click here for Chart 3, which is interactive; hover your mouse over the lines and curves for details.

The Ministry of Education accounts for almost 20% of spending by the Government of Ontario at approximately $27 billion annually. Of this money, $26 billion goes to school boards and schools to directly fund primary and secondary education, with the remainder used for ministry operating expenses.[iii]

As seen in Chart 4, teacher salaries and benefits account for the largest portion of provincial education spending.[iv] The initial expenditure on teachers is roughly $10.5 billion from the Pupil Grant, with an additional supplementary spending of $2.3 billion from the Teachers Qualification Grant. While normal teacher salaries and benefits are handled by transfers from the Pupil Grant, the Teachers Qualification Grant is used to supplement schools in paying teacher salaries above the annual average of $75,000. In addition, the School Foundation Grant, valued at about $1.4 billion annually, is used to compensate principals, vice principals, and other support staff within the school.

Further, the Special Purpose Grant accounts for just over $11.5 billion dollars in funding, making up the second most prevalent Education spending category. This is primarily used to fund the Teachers Qualification Grant (discussed above), the Special Education Grant, and the School Faculty Operations Grant. The Special Education Grant, with spending of just over $2.8 billion, is used to support schools which have students that require special education needs. This is primarily achieved through specialized teachers, services, and equipment. Furthermore, the School Faculty Operations Grant is intended to finance capital purchases for the school boards, such as operating costs, maintenance costs, and construction costs.

Chart 4: Expenditures by the Ministry of Education 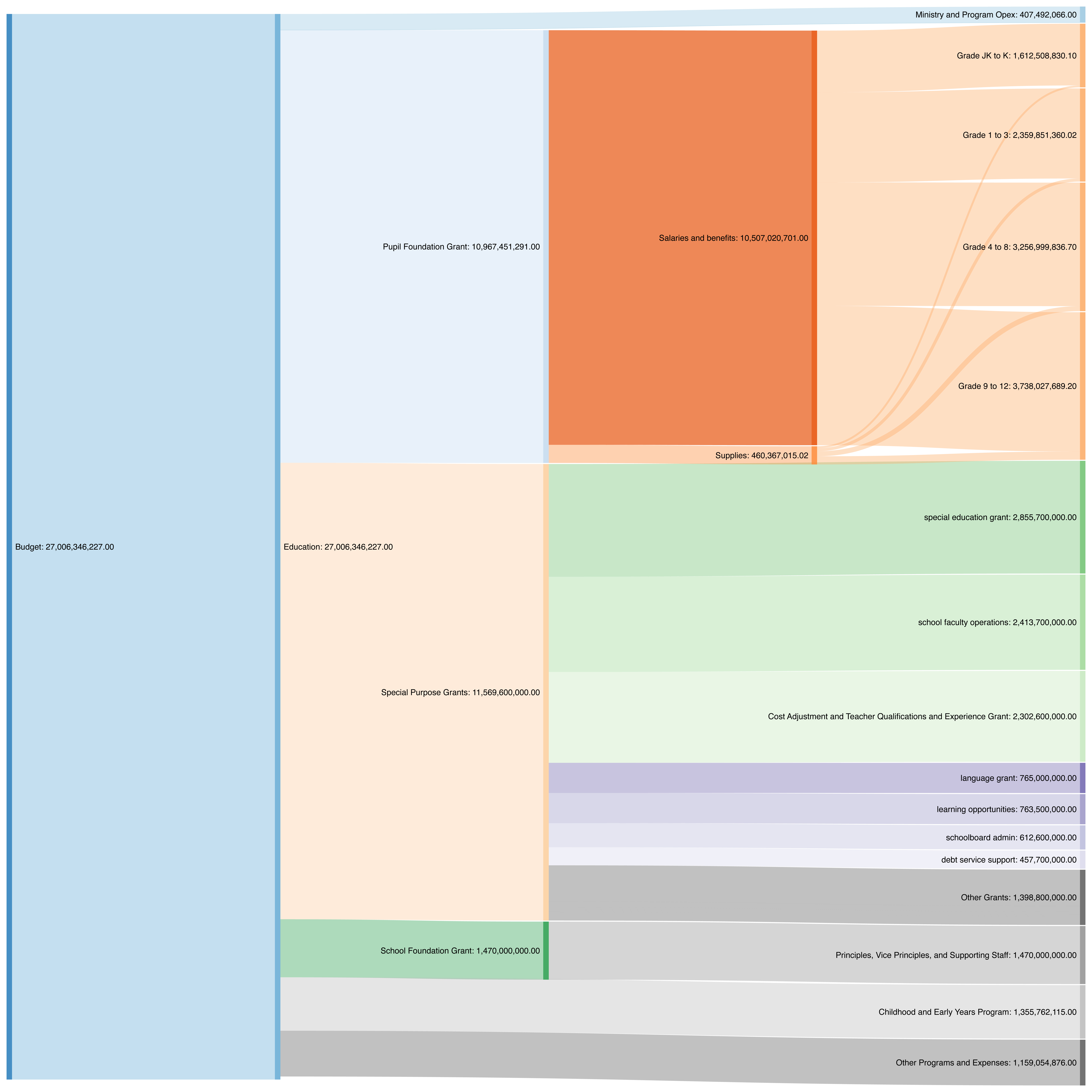 Click here for Chart 4, which is interactive; hover your mouse over the lines and curves for details.

Ministry of Community and Social Development

The ODSP spends around $4.8 billion dollars every year, funding approximately 470,000 beneficiaries per month.[vi] This money is used to financially assist clients and their families with essential living expenses, provide benefits including prescription drugs and vision care, and help with finding and keeping a job.

Ontario Works provides both financial and employment assistance to approximately 450,000 beneficiaries per month (including claimants and their dependents), with a price tag of roughly $2.8 billion a year.[vii] Financial assistance includes income support to help with the costs of basic needs (such as food, clothing, and shelter) and health benefits for clients and their families. In addition, the Employment Assistance Program includes assistance to help clients find, prepare for, and keep a job––for example, workshops on resume writing and interviewing, job counselling, job-specific training, and access to basic education.

The smaller of the three programs, the Ontario Drug Benefit Plan, provides just over a $1 billion in funding each year to supplement OHIP in reducing the price of drugs and medication for people under the age of 24 or above 65, on ODSP or Ontario Works, facing drug costs of at least 3% of income, etc.

Chart 5: Expenditures by the Ministry of Community and Social Development 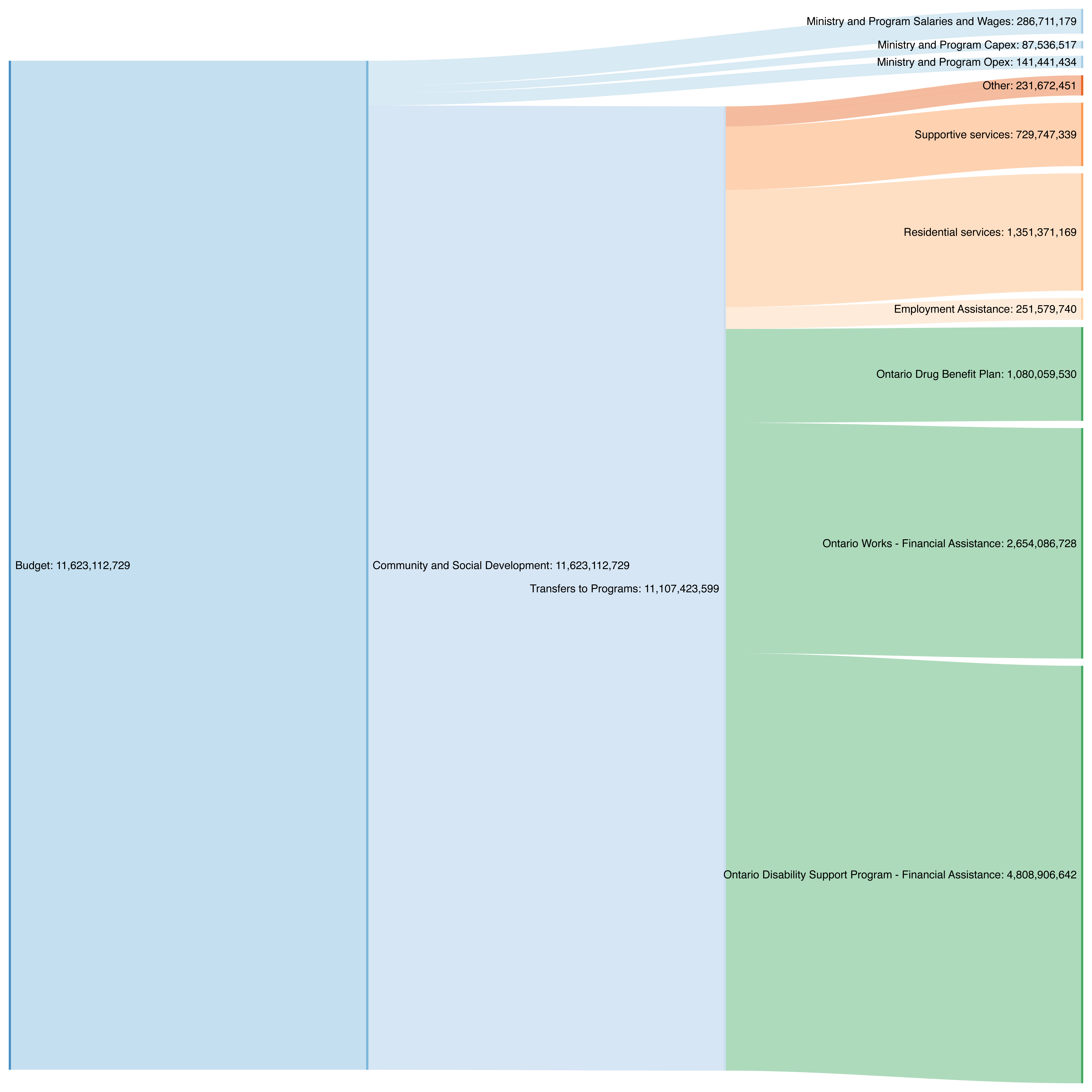 Click here for Chart 5, which is interactive; hover your mouse over the lines and curves for details.

The Ministry of Advanced Education and Skills Development has a budget of $8 billion, predominantly transferred to four major areas. This ministry funds both Canadian universities and colleges, accounting for approximately $5 billion of Ministerial spending.[viii] Chart 6 breaks down these transfers to institutions, with all institutions receiving above $220 million receiving their own line item and those receiving under $220 million being aggregated into the “other” category. In the case of colleges, none of the 24 colleges in Ontario that receive transfers are allocated more than $170 million. Because of this, they are all aggregated into one spending category.[ix]

The third largest spending area outside of colleges and universities is the Ontario Student Assistance Program (OSAP), which represents another commitment of just over $1 billion annually. This spending is a transfer directly to persons, in the form of both non-repayable grants and low interest loans. The final area of expenditure is the employment and training program, which funnels provincial funding into creating internships, apprenticeships, and labour market training. In this case, the “Other” line item consists mainly of payments to smaller programs and tax credits.

Chart 6: Expenditures by the Ministry of Advanced Education and Skills Development 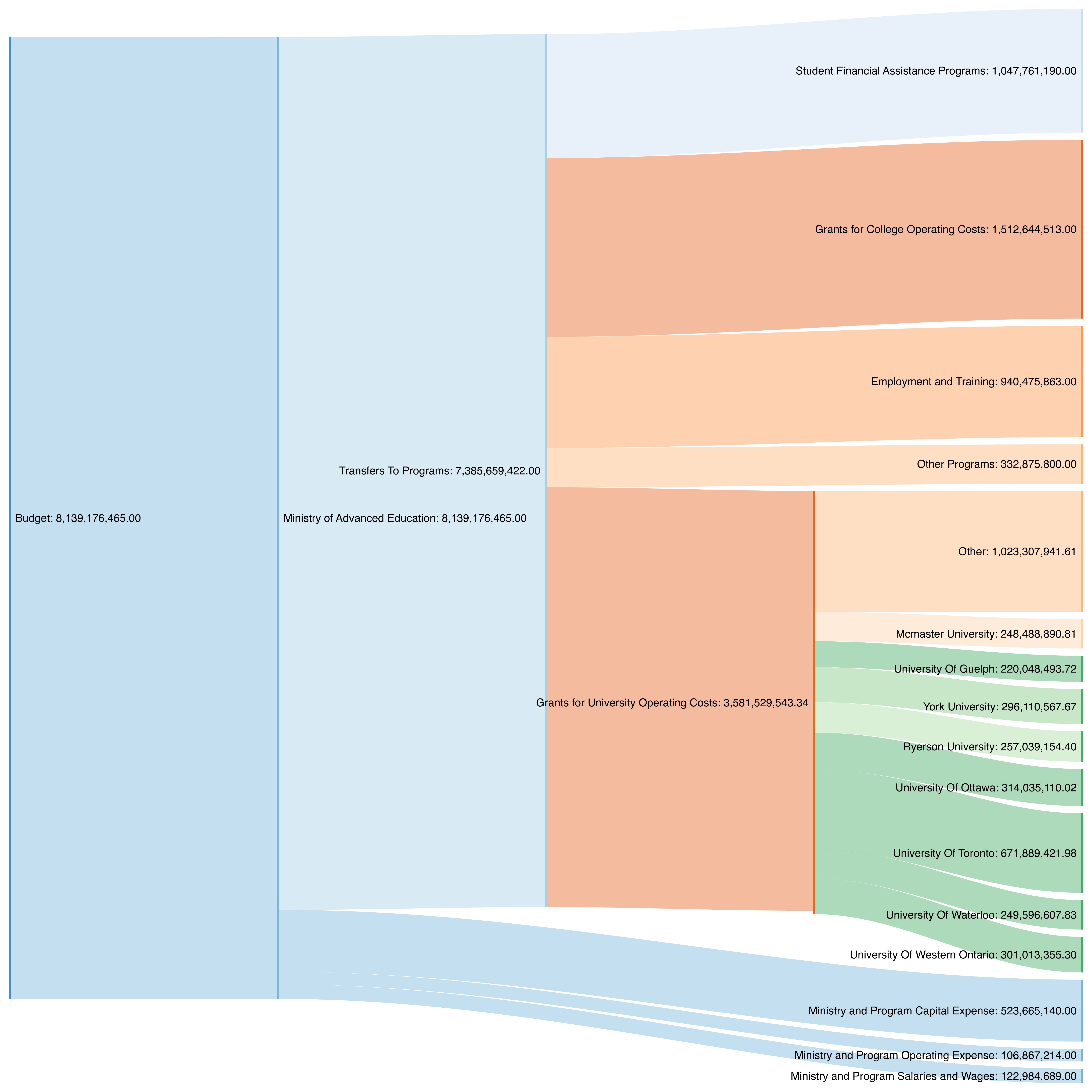 Click here for Chart 6, which is interactive; hover your mouse over the lines and curves for details.

With respect to spending reviews, a key issue is the extent to which a government’s spending plan can be addressed (i.e. reduced, reformed, renewed) by the exercise.  Major review exercises like the federal Program Review of the 1990s showed that most expenditure areas are indeed addressable in a crisis or in the long-run.  However, in the short run, and in Ontario’s particular case, the lion’s share of government spending is concentrated in the four largest departments and the bulk of that spending is tied to the compensation of employees.  Finding material savings through an expenditure review would involve re-evaluating programs, services, and government operations to determine which program activities may be deemed less effective, inefficient, or misaligned to government priorities.  This approach is not easy but is both possible and desirable in that it can contribute to renewed public confidence in the way government spends taxpayer funds.  The IFSD will be publishing additional papers on the subject of expenditure reviews, based on our research and experience on the subject.