Infrastructure investments have become a popular political and policy tool with governments these days in order to improve productivity, economic growth, and the standard of living.  The current Government of Canada was elected in 2015 on a platform that included a promise to invest in infrastructure projects that “our country needs”.  Canada’s aging infrastructure, historically low interest rates, and election commitment to run modest deficits in the short-term before soon returning to balance were key underpinnings of this election promise.

Fast forward two years and interest rates have started to rise while the fiscal outlook is for budget deficits as far as the eye can see. Part of the reason for the forecast is the substantial plan for federal government infrastructure spending. The Government of Canada’s infrastructure plan is looking to invest $180 billion over the next twelve years. Meanwhile, Ontario’s plan is to spend $160 billion over 12 years under a program that was started in 2014-15.  (For more details on the long-term fiscal implications of infrastructure, see the IFSD’s 2017 Fiscal Sustainability Report.)

The current deficit-plagued fiscal environment highlights the critical importance of managing these planned infrastructure investments prudently to obtain the best value for money on behalf of Canadians.  This challenge is particularly acute in a time of fiscal constraint when there is significant competition for scarce resources.

But there are impediments to implementing an effective national strategy.

Over a fifty-year period, there has been a pronounced shift in asset share from the federal government to the subnational level, the latter holding nearly 90 percent of public infrastructure in Canada in 2013 (FCM, Source: Statistics Canada, National Economic Accounts Division, 2013).  However, local governments collect only eight cents of every Canadian tax dollar (Centre for Policy Alternatives, 2013).  Further, as noted by the Parliamentary Budget Officer, the federal government is projected to eliminate its net debt in just over 40 years while aggregate subnational government net debt is expected to rise from 28.0 per cent of Gross Domestic Product (GDP) to over 100 per cent of GDP within the next 75 years. 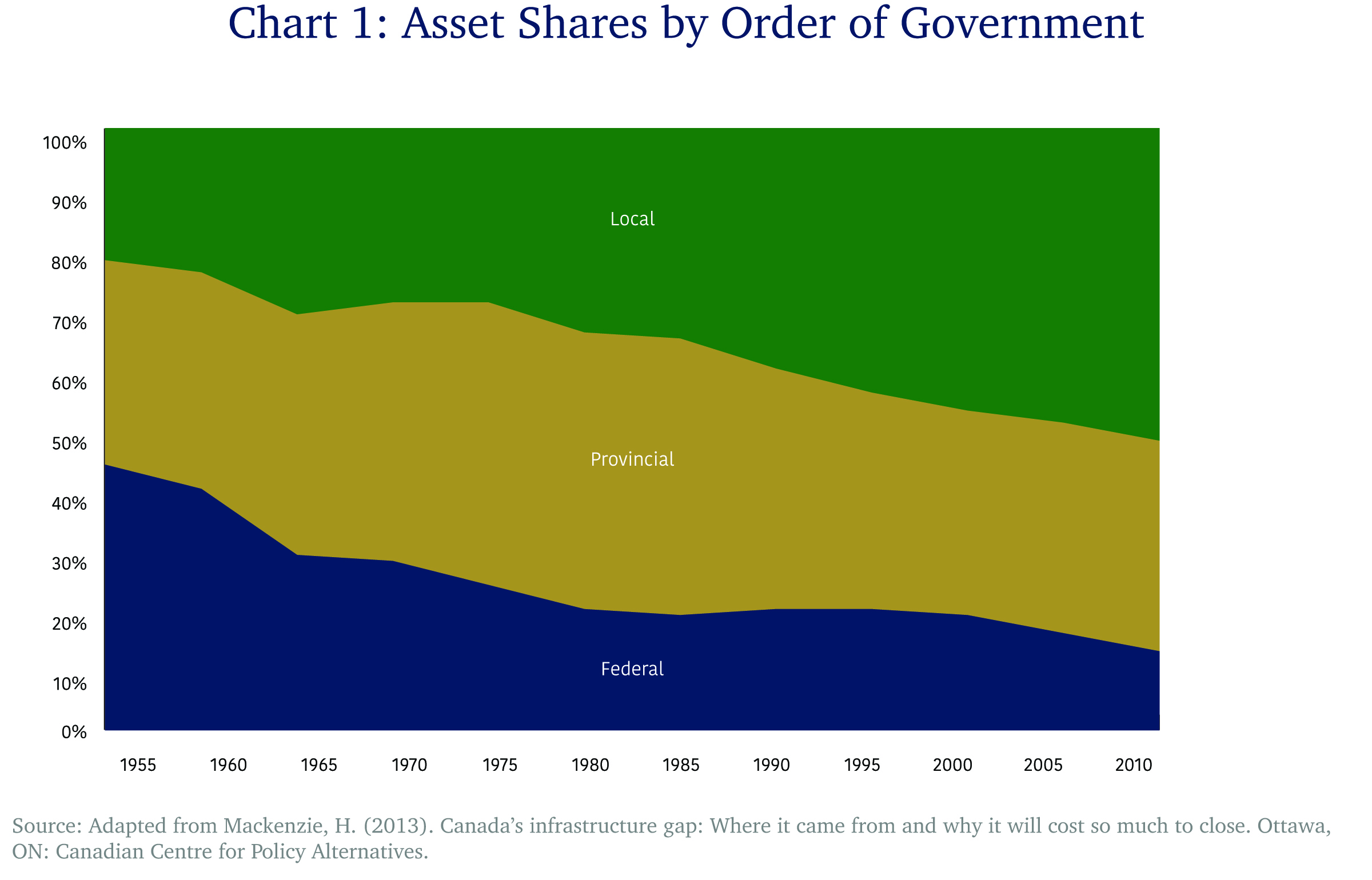 The asset shift combined with the narrower tax base for local governments has devolved responsibilities without a corresponding increase in fiscal capacity.  The result is that, for the foreseeable future, the federal government will be seen as an important source of funds for local and provincial infrastructure investments.  In addition, there will be on-going pressure, for those projects with demonstrable (and sustainable) revenue streams to seek private sector financing.

So, what does it take to ensure that we are getting fiscal probity from our infrastructure investments?  To answer this question, the Institute of Fiscal Studies and Democracy (IFSD) recently undertook a survey on the data architecture and data analytics underlying evidence-based infrastructure investment decision-making of leading international jurisdictions.

This survey confirmed that the key infrastructure decision support points are as follows:

The benchmarking survey found that there was no one jurisdiction that was the gold standard with respect to evidence based infrastructure decision-making. In the words of one senior infrastructure executive, “there is no best practice jurisdiction, we are all on the same journey to try and get there”.

The survey did highlight excellent practices and the IFSD’s research discovered that two key foundational elements are required first and foremost to enable optimized and truly evidence-based infrastructure investment decision-making.

The benchmarking survey found that New Zealand is in the forefront of this work and has developed national infrastructure metadata standards, across all orders of government, for their asset classes with the goal of consolidating all of this information in one place to create an analytical hub that optimizes Social, Economic, Environmental and Cultural outcomes from infrastructure investments[1].

These two foundation elements will create the consistent, normalised, relevant, and timely data and evidence needed to support all four-key infrastructure decision support points and enable evidence-based infrastructure investment decision-making.  In addition, the data will also lead to sophisticated interoperability analytics such as defining long-term liability, economic yield, intergenerational equity, and infrastructure affordability, among others.

IFSD’s survey also found that extracting the maximum value out of the existing infrastructure stock was a universal infrastructure priority to minimize the need to invest in new infrastructure.  The Australian State of Queensland has effectively prioritized brownfield over greenfield with the latter being a result of the existing stock not meeting needs after rigorous efforts at optimization.  Queensland places a great emphasis on ‘hard wiring’ this outcome into their infrastructure investment decision-making processes.  We should strive to emulate the Queensland model in Canada.

If Canada is able to lay the foundations of understanding its future needs and developing a common infrastructure language, it would provide the means for the federal government to fund the infrastructure plans of provinces and municipalities rather than individual infrastructure projects.  Further, a unified architecture would enable more transparent reporting on results through: the development of an infrastructure performance framework that would demonstrate the alignment between the long-term outcomes being sought and individual infrastructure assets; more clarity of investment opportunities for the private sector; and, a cleaner distinction between brownfield and greenfield projects, with the latter being the last resort of an asset optimization exercise.  Such an architecture would represent a significant improvement in synchronizing the mismatch between the funding and delivery roles within the Canadian federation and, most importantly, this improvement would be built on the foundation of robust evidence and high-quality data.